Fear of crimes has been led to restrictions on freedom residents and prevented them from participating in the public domain. One of the strategies to overcome the crime is (CPTED) which emphasizes on decreasing delinquencies by urban design and through modelling it's principles in public open spaces. Therefore, a survey on the perception of the Relationship between Support of Social Activities and Fear of Crime among 60 residents in Omid Residential Complex was conducted. The results found that the usage location, providing usage in the abandoned spaces and usage combination, have the highest impact on the residents’ place attachment, respectively.

Crime in residential Complex has been a social problem that has an improper influence on the life of thousands of residents every year (Abdul Mohit & Elsawahli, 2010). Fear of crimes (FOC) has been led to restrictions on freedom of traffic of residents and prevented them from attending and participating in the public domain and the open spaces (Newman, 1972). Nowadays, most of the designed residential areas which were the center of social interaction due to the lack of public oversight have become the merely passing way or lack of social life spaces which residents do not have a sense of belonging in these spaces (Karim & Abdul Rashid, 2010).

The results of the research showed that Support activity is one of the CPTED dimensions for increasing resident's security. The main conclusions are as follows:

- For increasing residents' security, the first concentration has to be on finding the best location for a usage in the residential complex. Then we allocate the usages for abandoned spaces and create activity in them. Also, we can combine different usages with each other. For example put a library or gym in a park can easily reduce the criminal opportunities. 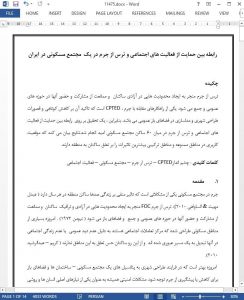