The transportation sector is a strong factor in terms of economic and regional balanced development, as well as also having a great influence on national integration to the world economic market. India has a rich history of trade across seas. Ports constitute an important economic activity in coastal areas. The higher the throughput of goods and passengers year-on-year, the more infrastructure, provisions and associated services are required. These will bring varying degrees of benefits to the economy and to the country. Ports are also important for the support of economic activities in the hinterland since they act as a crucial connection between sea and land transport. As a supplier of jobs, ports do not only serve an economic but also a social function. In terms of load carried, seaway transportation is the cheapest and most effective transportation system compared to other systems. Industries require a safe and cheap means of exporting finished goods and importing raw materials. Hence the majority of industries in the world are located in the coastal belts, in the vicinity of major ports. These industries in turn, influence the lives of the employees and indirect benefactors. This report seeks to study the role played by ports in the development of a nation.

Oceans have always been an alien realm for humans. Ancient humans dared not sail too far into the ocean for fear of falling off the edge of the world. As science progressed, humans began to understand more about this unknown world. Ancient civilizations had trade relations between the coastal cities. The age old belief was broken when the planet was proven not to have edges according to Castro et al. (1970).

Results of the various reports from ports around the world clearly put forth the idea that ports are a vital part of a country’s economy. The growth of ports will unerringly boost the country’s economy. The growth and development of ports leads to greater trade activity, increased supply, greater foreign reserves and reduced prices for commodities as a whole. Improvement in the port infrastructure has shown very good reflections in the GDP in the cases discussed. 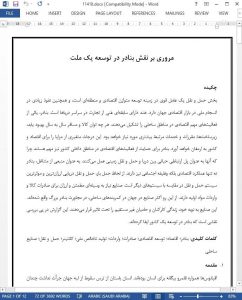