MicroRNAs (miRNAs) encoded by the miR-15/16 cluster are known to act as tumor suppressors. Expression of these miRNAs inhibits cell proliferation, promotes apoptosis of cancer cells, and suppresses tumorigenicity both in vitro and in vivo. miR-15a and miR-16-1 function by targeting multiple oncogenes, including BCL2, MCL1, CCND1, and WNT3A. Down-regulation of these miRNAs has been reported in chronic lymphocytic lymphoma (CLL), pituitary adenomas, and prostate carcinoma. This review summarizes the discovery, functions, and clinical relevance of these miRNAs in cancer, particularly CLL.

MicroRNAs (miRNAs) are a relatively recently identified class of regulatory noncoding RNAs, typically 20–23 nt in length, which function primarily by targeting specific messenger RNAs (mRNAs) for degradation or inhibition of translation and hence decreasing the expression of the resulting protein.1,2 Their regulatory functions involve a variety of biological processes, including development, differentiation, apoptosis, survival, senescence, and metabolism.3,4 Several hundred miRNAs have been identified and studied so far, but it is predicted that there are many more miRNAs whose significance and role in homeostasis and pathology is yet to be identified. Intriguingly, a significant fraction of miRNA genes map to regions implicated in cancer susceptibility and at fragile sites, suggesting a role of miRNAs in carcinogenesis.5–7

We envision the possible future use of miRNAs or compounds interacting with miRNAs as new therapeutic agents in cancer. Compared with other RNA inhibition techniques (such as antisense oligonucleotides (ASOs), ribozymes, and siRNAs), the major advantage of using miRNAs to treat cancer patients is that a specific miRNA targets several genes involved in the same pathway. For example, among the components of the miR-15a/16-1 signature in CLL, a disease in which the main altered cell program is apoptosis, we observed significant enrichment in cancer genes (such as MCL1, BCL2, ETS1, and PDCD6IP) (Table 1) that directly or indirectly affect apoptosis and the cell cycle. 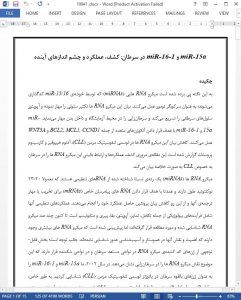 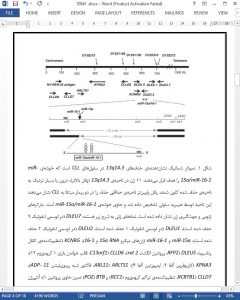 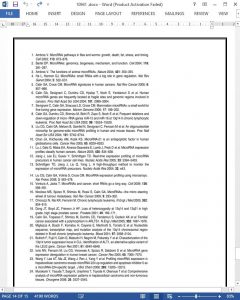