Objectives: In vitro fertilization (IVF)success depends on many factors whose independent roles have not been fully investigated. The aim of this study was to evaluate the role of associated factors in women undergoing IVF in Iran.

Results: Mean age of the cases was 32 years and mean body mass index (BMI) was 20 kg/m2. Clinical pregnancy rate was 20.6%. A significant relationship was found between IVF success and AMH, the number of FSH injections, endometrial thickness, grade of the embryos, and the number of embryos produced. Logistic regression analysis showed that only AMH > 0.6 was an independent predictor of IVF success (odds ratio [OR] = 6.22, CI [2.4-16.2]). Further analysis showed a significant relationship between AMH level and IVF success in women ?35.

Conclusions: The overall success rate of IVF/ET was 20.6%. AMH is a significant predictor of IVF success and may be an important factor in IVF success in young women.

The overall success rate of IVF/ET was 20.6%. AMH was an independent predictor of IVF success after adjustment for the number of embryos produced. Due to the small sample size in studies in Iran, we recommend that a meta-analysis on the factors involving in IVF success be conducted. 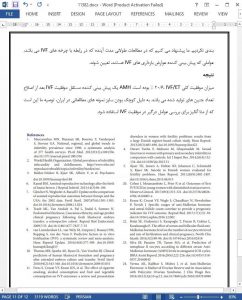