Objective To examine the relationship between the catch-up growth of preterm, SGA children and their behavioral development. Methods We analyzed data from a large Japanese, nationwide, population-based, longitudinal survey that started in 2001. We restricted the study participants to preterm children with information on height at 2 years of age (n = 1667). Catch-up growth for SGA infants was defined as achieving a height at 2 years of age above −2.0 standard deviations for chronological age. We then used logistic regression to estimate odds ratios (ORs) and 95% confidence intervals (95% CIs) for the associations of SGA/catch-up status with neurobehavioral development both at 5.5 and 8 years of age, adjusting for potential infant- and parent-related confounding factors.

Small-for-gestational age (SGA) is a major concern in current developmental medicine and is comparable with preterm birth [1]. SGA has been shown to increase the risk for developmental delay and behavioral problems including inattention and aggressive behaviors even in full-term infants [1–5]. Moreover, previous studies have shown the relationships between SGA and inattention or attention deficit hyperactivity disorder (ADHD) among premature infants [6–8], although premature birth itself has also been shown to increase the risk of behavioral problems [9,10]. Guellec et al. showed that SGA was a risk factor for inattention-hyperactivity symptoms at 5 years among children born 29 weeks to 32 weeks of gestational age (GA) [6]. Tanis et al. showed that very preterm (less than 32 weeks of gestational age) SGA school-age children had lower functioning selective attention as compared with very preterm appropriate for gestational age (AGA) children [7]. As for an older age group, Strang-Karlsson et al. reported that the SGA group had more executive dysfunctions, which were generally thought to be related to ADHD [11], than the AGA group did among 18- to 27-year-old survivors of very low birth weight (less than 1499 g) [8]. Similarly, our previous study also showed that preterm SGA children were at a slightly increased risk for inattention at preschool age as compared with preterm non-SGA children [1]. 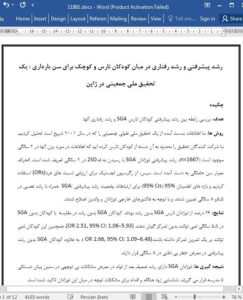 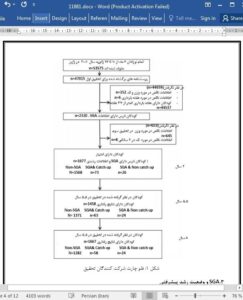 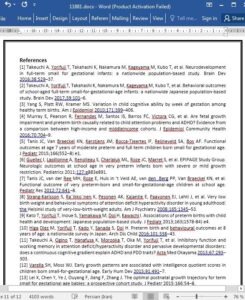