The ability of certain cancer cells to maintain a highly reduced intracellular environment is correlated with aggressiveness and drug resistance. Since the glutathione (GSH) and thioredoxin (TRX) systems cooperate to a tight regulation of ROS in cell physiology, and to a stimulation of tumour initiation and progression, modulation of the GSH and TRX pathways are emerging as new potential targets in cancer. In vivo methods to assess changes in tumour redox status are critically needed to assess the relevance of redox-targeted agents. The current study assesses in vitro and in vivo biomarkers of tumour redox status in response to treatments targeting the GSH and TRX pathways, by comparing cytosolic and mitochondrial redox nitroxide electron paramagnetic resonance (EPR) probes, and cross-validation with redox dynamic fluorescent measurement. For that purpose, the effect of the GSH modulator buthionine sulfoximine (BSO) and of the TRX reductase inhibitor auranofin were measured in vitro using both cytosolic and mitochondrial EPR and roGFP probes in breast and cervical cancer cells. In vivo, mice bearing breast or cervical cancer xenografts were treated with the GSH or TRX modulators and monitored using the mito-TEMPO spin probe. Our data highlight the importance of using mitochondria-targeted spin probes to assess changes in tumour redox status induced by redox modulators. Further in vivo validation of the mito-tempo spin probe with alternative in vivo methods should be considered, yet the spin probe used in vivo in xenografts demonstrated sensitivity to the redox status modulators.

Cancer cells sustain a much higher level of ROS production compared to normal cells [1]. Reports have proposed that, by buffering ROS levels, cancer cells can restrict ROS within a range of concentrations that should favor tumor progression [2, 3]. The ability of certain cancer cells to maintain a highly reduced intracellular environment is therefore strongly correlated with aggressiveness and drug resistance [4, 5]. In patients, the expression levels of human antioxidant genes(HAGs) and oxidative markers were related to tumor aggressiveness and predicted poor outcome in patients with early‐stage lung adenocarcinoma [6]. Also, tumor redox parameters measured by 62Cu‐ATSM PET determined the outcome of patients with head and neck cancer [7]. This is in line with a recent study showing that the ratio of oxidized versus reduced GSH was strongly correlated with locoregional control of HNSCC tumors [8]. Finally, analysis of 25 independent cohorts with 5910 breast cancer patients showed that overexpression of thioredoxin (Trx1) and thioredoxin reductase (TrxR1) was associated with a poor overall survival, distant metastasis‐free survival and disease‐free survival [9]. Other studies showed similar correlations in non‐small cell lung carcinoma [10] and colorectal cancer [11].

Contrarily to other techniques, spin probes have the potential for in vivo imaging of tumor redox status, using either EPR imaging or MRI [35, 36]. Our data highlight two important findings while assessing the modulation of tumor redox status using spin probes: (i) the importance of using mitochondria‐targeted spin probes to assess changes in tumor redox status, as demonstrated in vitro in the current study, and (ii) the identification of a potential in vivo redox biomarker in response to modulators of the GSH or Trx systems. Despite the ability of the drugs to alter tumor redox status as confirmed using GSH dosage and the non‐ specific ‘TCA’ dosage kit, our data show that the cytosolic spin probe tempol did not detect changes in tumor redox status induced by the modulation of the GSH or Trx pathways in vitro, contrarily to the mitochondrial spin probe mito‐tempo. The fact that the cytosol is maintained more reduced than the mitochondrial matrix in most mammalian cells might reduce the sensitivity of the detection method in the former compartment [44, 45, 46]. The mt‐roGFP1 probe was also able to demonstrate the changesinduced by BSO or auranofin in both cell lines under study. These in vitro results are in line with a previous study, using cytosolic and mitochondrial Grx1‐roGFP2, in which the cytosol of cells with impaired GSH synthesis resisted oxidative stress, while significant oxidation was generated in the mitochondrial matrix upon BSO treatment [47] 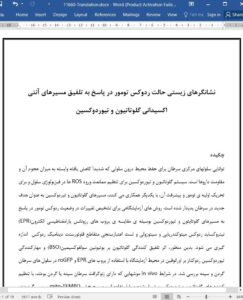 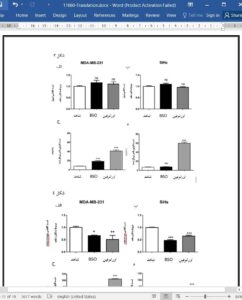 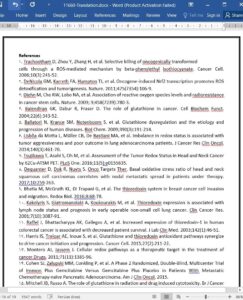