Drought is one of the most important threats to plants and agriculture; therefore, understanding of the mechanism of drought tolerance is crucial for breeding of drought tolerant plants. Here, we assessed effects of four levels of drought (90%, 55%, 40% and 25% FC) on some physiological criteria and metabolite adjustment of two different drought-responsive thyme plants (Thymus vulgaris as drought sensitive and T. Kotschyanus as drought tolerant species), using 1H-NMR. Among three physiological parameters and 18 identified metabolites, species × treatment effects were significant (P ≤ 0.01) for leaf temperature, acetic acid, citric acid, fumaric acid, malic acid, succinic acid, fructose, sucrose and serine. RWC, chlorophyll and carotenoids content, glucose, alanine and choline were affected by simple effects of species and treatment. Correlation analysis revealed that there is a different correlation between physiological parameters and metabolites in both species. This analysis also revealed that, by ignoring the correlation between malic acid and succinic acid in T. vulgaris, there was no significant correlation between TCA intermediate in both species. According to results, sugars, amino acid and energy metabolism were affected by drought and, among them, TCA intermediates had more alternation in two studied species so, this cycle and its intermediates probably have more prominent role than other identified metabolites in the induction of drought tolerance.

Environmental stresses (biotic and abiotic stress) are serious threats to agricultural production (Nakabayashi and Saito, 2015). Drought is an important abiotic environmental stressor of plants and water deficit is typically the most limiting factor for plant growth, yield, and productivity (Barchet et al., 2014). In most areas of the world, agriculture is more influenced by drought because of changes in rainfall pattern caused by global climate change, as well as competition with growing population and industry (Sanchez et al., 2012). To increase the agricultural efficiency within the inadequate land resources, it is important to ensure higher crop yields against unfavorable environmental stresses. Understanding the reaction of plants to water-limited conditions is crucial and will pave the way for improving tolerance to drought (Reddy et al., 2004). 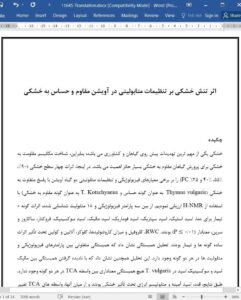 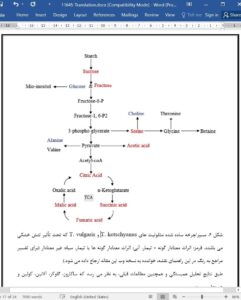 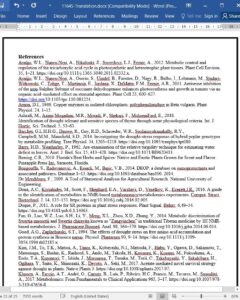