There are little investigations in the literature on the nanotechnology's application in the geothecnical field. Since, lots of soil and rock minerals are nanomaterial and their chemical reactions are in the nano-scale, there is a great potential for the use of this technology in different fields of geothecnical engineering such as seepage, grouting, soil stabilization and etc. In this study the stabilization of a weak soil was investigated using nanomaterial. The weak soil was obtained from Boodian Road in North of Iran and classified as low plasticity clay. Fifty CBR tests were conducted in this study. At the first step the effect of lime on the stabilization of the weak soil was investigated. The results proved a little effect of lime in the soil improvement. At the second step, the effect of nano-silica on the stabilization of the soil-lime mixture was studied. The results illustrated the important effect of nano-silica in the soil-lime mixture, in which adding nano-silica increased the CBR strength of the soil and soil-lime mixture up to 21 and 7.5 times respectively. The effects of curing time were also evaluated in this study and the results showed that the CBR strength of the soil-lime mixture increases more rapidly with adding nano-material. In this research, the optimum mixture design for stabilization of the Boodian weak soil was selected as 5% lime and 3% nano-silica added to the soil.

The nanotechnologies idea was suggested by Richard Feynman for the first time in 1959, with this sentence "There’s plenty of room at the bottom" (Feynman 1959). After that, this technology developed in all branch of sciences. Different descriptions of this technology exist in the literature. However national pioneers of nanotechnology in United States have presented a comprehensive definition of this technology (NNI 2007): 1. Research and technology development at the atomic, molecular, or macromolecular levels, at a length scale of approximately 1 to 100 nanometers (a nanometer is onebillionth of a meter, too small to be seen with a conventional laboratory microscope);

In this study the application of nanomaterial in the stabilization of low plasticity clay of Boodian road was investigated. The nano-silica was selected as one active pozzolanic material and added to the soil-lime mixture with optimum amount of lime. The results of this study can be drawn as follow:

- The optimum amount of lime in the mixture of soillime was 5% in which the highest amount of CBR strength was achieved. 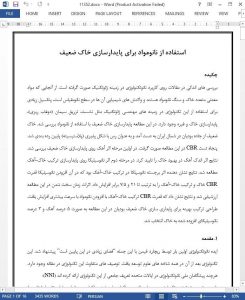 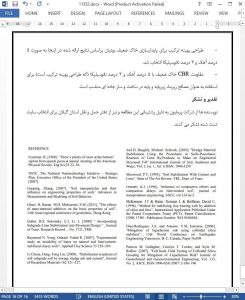