The influence of National Culture (NC) on Project Management (PM) and specifically project planning is not well understood. We report the results of an empirical study of British and Arab project managers in the United Arab Emirates (UAE). A structured survey method was used to investigate NC and the integrity of Planning processes. Differences between the Arab and British attitudes and perceptions of planning were analysed using Mann– Whitney U tests and Independent t-tests. Ratings in Scope, Time planning, Innovation/Technology, Integration, and Communication variables significantly differed between both groups, with the Arab group rating Communication higher and the British group rating the remaining variables higher. Hypothesised relationships on NC differences were supported for Scope, Time planning, Integration and Innovation/Technology. Since they rated the integrity of planning practices differently we conclude that NC influences the way a project manager understands the planning stage of the project.

Projects often comprise of people and organisations from different NCs such as multicultural teams, foreign managers, and international partners. A number of authors have called for more attention to be paid to the impact of NC on PM processes (Rees, 2008; Shore and Cross, 2005). For instance, Zwikael et al.'s (2005) study of NC and PM found that there were cultural differences in the intensity of planning processes and proposed that more research be carried out in other countries. Interestingly, Hodgson (2007: 224) argues that PM associations are nationally embedded and that professionalism is nationally and culturally circumscribed. Therefore, if associations such as the PMI, ASAPM (US), APM (UK), GPM (Germany) PMAJ (Japan) and IPMA continue to pursue professional status, NC research seems even more relevant.

Our research question asked whether differences in NC lead to different expectations regarding project planning. We conclude that NC influences the way in which a project manager understands the planning phase of a project. Our study supports Milosevic's (1999) argument that the same PM practices are interpreted differently and Zwikael et al.'s (2005) finding that project managers from different NCs run similar projects yet manage them in different ways. This suggests that project members may actually have different PM cognitive schema or scripts concerning the planning stage (Milosevic, 2002; Shaw, 1990). This seems important for working relationships, communication and collaboration between all project members concerning both PM planning and execution. For example, Hall (1960) argued that conflict may arise between cultures that have different appreciations of time, i.e. a delay may infer low interest to a British project manager, yet working too quickly or looking too much into the future may drive the Arab project manager away. Hurn (2007) states that deadlines are seen as a guide by the Arab NC, which may be due to a Present time orientation. 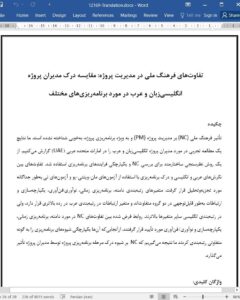 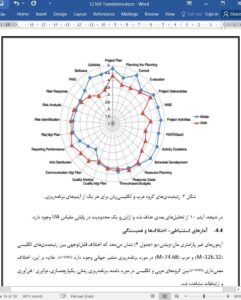 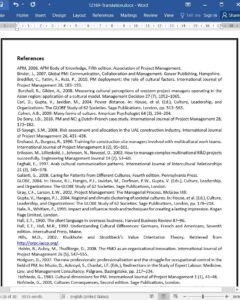