This paper provides an interpretation of the dynamic behaviour of yielding cantilever walls, regarding which open issues still remain about the applicability of the Mononobe–Okabe theory and the possible occurrence of phase shift between the maximum soil thrust and the inertia forces into the system, which both affect the seismic design of these structures. To this end, the predictions of a pseudostatic limit equilibrium/analysis model are combined with the results of an extensive numerical study, with both pseudostatic and dynamic analyses performed under real earthquakes and simple input motions. Numerical outcomes show that the maximum soil thrust on the stem and the maximum bending moment are always in phase and occur when the inertia forces are away from the backfill. The proposed model provides a good prediction of the maximum internal forces induced by the earthquake. It is shown that the possible activation of plastic mechanisms within the system, in the form of either sliding or bearing failure, makes the critical acceleration a key ingredient for the seismic design of cantilever walls, controlling both the maximum internal forces and the magnitude and trend of final displacements. Numerical and theoretical findings are used to provide suggestions for the seismic design of cantilever walls.

Reinforced concrete cantilever walls are widely used in design practice as an alternative to gravity walls, combining the flexural behaviour of the structural elements with the stabilising action of the soil mass above the footing slab. In contrast to other types of retaining structures, such as basement walls or bridge abutments, yielding cantilever walls do not have kinematic constraints and their movements permit the development of active limit conditions in the retained soil, both under static and dynamic conditions.

The numerical results presented in this paper made it possible both to gain valuable information on the seismic behaviour of yielding cantilever walls, in terms of expected permanent displacements and maximum internal forces, and to validate the predictions of a simple pseudostatic model, based on limit equilibrium/analysis methods.

As already observed for other types of yielding retaining structures (Conti et al., 2013, 2014), the dynamic behaviour of cantilever walls is primarily governed by the strength of the system, while the wall flexibility and the soil stiffness play a minor role. A direct consequence of this observation is that the critical acceleration turns out to be the key ingredient for their seismic design, controlling both the maximum structural internal forces and the final displacement. 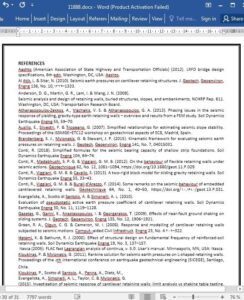