Internet of Things (IoT) is suffered from different types of attacks due to vulnerability present in devices. Due to many IoT network traffic features, the machine learning models take time to detect attacks. This paper proposes a feature selection for intrusion detection systems (IDSs) using Information Gain (IG) and Gain Ratio (GR) with the ranked top 50% features for the detection of DoS and DDoS attacks. The proposed system obtains feature subsets using insertion and union operations on subsets obtained by the ranked top 50% IG and GR features. The proposed method is evaluated and validated on IoT-BoT and KDD Cup 1999 datasets, respectively, with a JRipclassifier. The system provides higher performance than the original feature set and traditional IDSs on IoT-BoT and KDD Cup 1999 datasets using 16 and 19 features, respectively.

Internet of Things (IoT) is a globally adopted technology in automated network systems. The next stage of the Information Technology (IT) rising and interconnectivity is the IoT, from little toy to homemade application to the smart city in IoT. IoT is a mixture of cloud-connected embedded systems used by the consumer to access IT-related services utilizing the combination of electronics-related things and internet protocol. 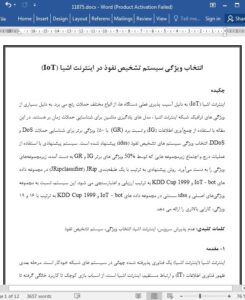 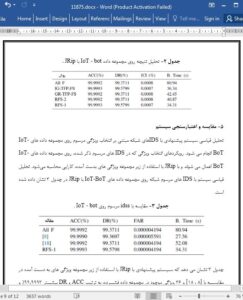