New planning policy in England and Wales should direct future development away from areas of high flood risk, but it is inevitable that some development will be necessary in places that flood, albeit with a low or residual risk. As part of the hierarchy of flood mitigation measures, a growing consideration promoted by Government, planners and insurers is to design and construct these new dwellings so they are more resistant or resilient to flood damage. Flood resilient repairs have also been promoted for many years for existing properties that suffer from flooding. These approaches are particularly important since climate change is likely to bring with it an increased flood risk. HR Wallingford took a key role within a research consortium that produced fresh guidance on ‘Improving the flood performance of new buildings’. The report, published in May 2007, was jointly funded by Communities and Local Government and Defra/Environment Agency. Part of the research involved the laboratory testing of materials and construction assemblies at HR Wallingford under appropriate flood conditions. Results on water penetration and drying ability have provided new information to corroborate previous opinion, both ‘anecdotal’ and expert. This paper outlines the various stages in the production of this new guidance document, which in addition to the laboratory testing also undertook a comprehensive literature review, including information from North America, the Netherlands and Australia. The guidance manual provides information on flood avoidance and resistance measures but it is mainly concerned with flood resilient design and construction. Flood resilient construction has clear benefits. It can limit damage to the fabric of a building and minimise the time during which families are without their home. As a result it can help to reduce the stress and anxiety that flooding can cause.

1 Overview of Planning and Flood Risk Management in the UK

As a result of the wettest May-July period in England and Wales since records began in 1766, severe flooding occurred in the summer of 2007. In the counties of Yorkshire and Humberside alone over 5000 residential properties were flooded and in Gloucestershire over 350,000 people were without mains water due to flooding of the local water treatment works (The Pitt Review, 2007).

Flood resilient construction has clear benefits. It can limit damage to the fabric of the building and minimise the time during which families are without their home. As a result it can help reduce the stress and anxiety that flooding can cause. Houses fitted with resilience measures can be reoccupied after a few days whereas several months (or even years) are sometimes needed for “standard” properties after a major flood event. Shortage of competent flood repair organisations and delays in reoccupying homes have been key features of the recovery from major flooding in the UK since 2005. 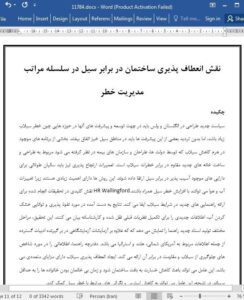 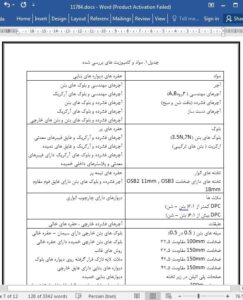 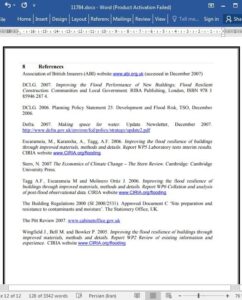