This paper suggests the topic of corporate agility as a fruitful area for corporate governance research. Corporate agility, which refers to a firms ability to adapt to changes in its environment, is likely to be a critical, yet understudied, determinant of firm performance and survival. This paper proposes an inverse relation between the centralization of decision-making in firms and agility. It also proposes that certain governance structures often viewed as increasing agency costs, such as insider-controlled boards and dual class stock, may actually increase agility and thereby improve firm performance and the chances of survival. The paper concludes with a discussion of specific ways in which agility might be incorporated into the corporate governance literature.

The financial economics literature on corporate governance, largely non-existent prior to the 1970s, has grown enormously during the past forty years. There likely are two major reasons for the recent development of this literature. First, major intellectual breakthroughs in the theory of the firm and agency theory during the 1970s (Alchian and Demsetz (1972), Ross (1973, 1974), Jensen and Meckling (1976), Fama (1980)) elevated the importance of corporate governance and provided a framework for testing hypotheses regarding the causes and consequences of alternative governance arrangements. Second, the proliferation of hostile takeovers and corporate control contests during the 1980s, followed by high profile corporate scandals in the 1990s and the 2000s (e.g., Enron, Worldcom) increased the relevance of corporate governance research.

The significant growth in the corporate governance literature during the past 40 years has advanced our knowledge of the causes and consequences of different governance mechanisms, to a large extent, from the perspective that governance is intended to mitigate agency costs. Notwithstanding the advances that have been made, this paper argues that the literature has largely ignored an important consideration, namely, the extent to which different governance structures promote or impede corporate agility, which may be a higher order determinant of long-run performance and survival for many firms than the mitigation of agency costs. 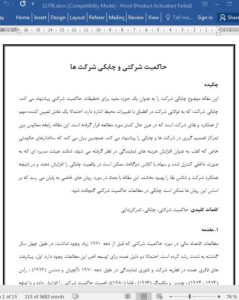 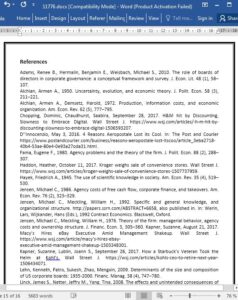