We employ Prospect Theory (PT, Kahneman and Tversky [1979]) to explain the relationship between risk and return at the organization level. Our modeling approach addresses shortcomings in previous research approaches. We suggest an alternative approach for inferring the reference point, a key element of PT, and measuring risk, as well as a different representation of the risk-return association taking into consideration a timeline of the firm’s state, its state dependent action, and consequences. Consistent with PT, results using COMPUSTAT data show that firms with returns above their reference levels take less risk than firms with returns below their reference levels.

Economic and financial research has been dealing with the risk-return tradeoff for decades, with Expected Utility Theory (EUT, Von Neumann and Morgenstern [1944]) as the main tool for analyzing decision making under risk. The conventional assumption of risk aversion, a basic premise of EUT, suggests a positive relationship between risk and return. Indeed, early empirical research at the organizational level supported this relationship. Nevertheless, while EUT explains many economic occurrences, a substantial body of evidence shows that decision makers systematically violate its basic tenets.

This research employed Prospect Theory (Kahneman and Tversky [1979]) to explain the relationship between risk and return at the organization level. Our research addressed shortcomings in the modeling approach used in previous research and suggested an approach aimed at resolving these problems. We suggested an alternative view for inferring the reference point, one of the key elements of PT, and the way of measuring risk, as well as a different representation of the risk-return association taking into consideration a timeline of a firm’s state, its state dependent action, and consequences. Previous studies estimated a firm’s reference points and risk and return position based on its time series of returns over the time period under study (usually 5–10 years). The underlying assumption in the approach taken by these studies was that a firm’s behavior and situation are time invariant. The main criticism regarding this approach is that the use of the suggested measures may be appropriate only if the return distribution is constant over the studied time period. This criticism is especially noteworthy in the context of PT, as a firm’s position relative to the reference level and hence its actions are state dependent. 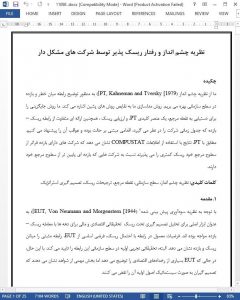 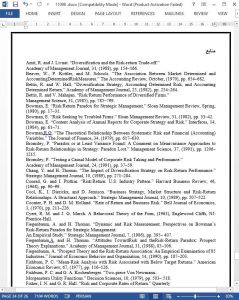