Background/Objective: The objective of the current investigation was to distinguish the impact of six weeks of combined plyometric-resistance and combined plyometric-sprint trainings on the fitness elements among male students. Methods/Statistical Analysis: 143 males aged 18 to 22 years were categorized into 3 groups, Plyometric-Sprint Training (PST, n = 48), Plyometric-Resistance Training (PRT, n = 47) and a Control Group (CG, n = 48). The experimental groups trained for 40 min per workout 2 days a week, for 6 weeks. Before and after training, tests were assessed on body composition, speed, power and agility. ANOVA and paired t-tests were used for analysis. Findings: The outcomes of all the components of this investigation showed that both the PSTand the PRT revealed significantly greater reduction in the mean values than the CG (P˂0.05), but no change was recorded between them in 30 m, 40 m and a 50 m run (P˃0.05). However, in the Illinois agility test and standing long jump, the PST significantly exhibited greater declines in mean different values than the PRT (P˂0.05). Applications/Improvements: PRT and PST protocols have effectiveness for acceleration, speed, power and agility. PST showed reduction in agility and an increment in explosive power than PRT, but had same speed.

Plyometric workout refers to those activities that permit a muscle fiber to create the greatest power at the least possible time. The sporting community acclaimed the benefits of plyometric training and incorporated in their protocols to enhance the performance in sports1 . These benefits are increases of strength2,3, explosive power4,5, running economy6 , a decrease in agility times7,8 and ground contact times9 . Further, several studies reported reductions in 30 m sprint times10,11, in 40 m sprint times12 and at 50 m sprint times13 after the plyometric training program.

It was found that six weeks of combined PlyometricResistance Training and combined Plyometric-Sprint Training modes have remarkable influence with regard to acceleration, maximum speed and deceleration, explosive power and change of direction when the posttests were compared with the pre-tests. However, the training program had more effect for the CPSTG than the CPRTG in agility and standing long jump, but has similar consequences in speed constituents. 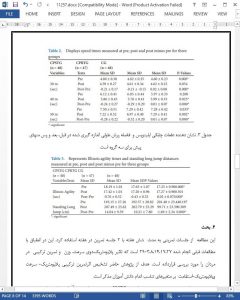 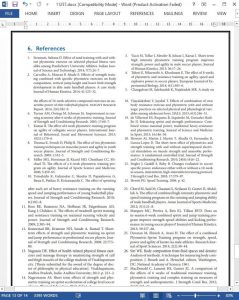