A closed-loop process to recover lithium carbonate from cathode scrap of lithium-ion battery (LIB) is developed. Lithium could be selectively leached into solution using formic acid while aluminum remained as the metallic form, and most of the other metals from the cathode scrap could be precipitated out. This phenomenon clearly demonstrates that formic acid can be used for lithium recovery from cathode scrap, as both leaching and separation reagent. By investigating the effects of different parameters including temperature, formic acid concentration, H2O2 amount, and solid to liquid ratio, the leaching rate of Li can reach 99.93% with minor Al loss into the solution. Subsequently, the leaching kinetics was evaluated and the controlling step as well as the apparent activation energy could be determined. After further separation of the remaining Ni, Co, and Mn from the leachate, Li2CO3 with the purity of 99.90% could be obtained. The final solution after lithium carbonate extraction can be further processed for sodium formate preparation, and Ni, Co, and Mn precipitates are ready for precursor preparation for cathode materials. As a result, the global recovery rates of Al, Li, Ni, Co, and Mn in this process were found to be 95.46%, 98.22%, 99.96%, 99.96%, and 99.95% respectively, achieving effective resources recycling from cathode scrap of spent LIB.

The demand of lithium-ion batteries (LIBs) is directly driven by their extensive applications on electrical and electronic products including laptops, mobile phones, electric bikes and vehicles (EVs) 1 . In 2014, the production of LIBs had reached 5.287 billion units only in China2 . It has subsequently resulted in a large amount of spent LIBs and production scrap required to be treated. On one hand, this type of waste is considered to be hazardous due to the high content of heavy metals 3 and fluoride-bearing electrolyte. On the other hand, significant amount of valuable metals 4 including Li, Ni, Co, Al, Cu, are ready to be recycled from such waste which has therefore attracted worldwide attentions to develop various technologies, aiming to either minimize the management risks or maximize the recovery rate of the valuable metals.

Based on previous theoretical and experimental results, a new lithium-ion battery production process under the leaching of formic acid was schematically plotted in Figure 7. The global recovery rates of all the metals are all over 90% and the main products are shown in Table 2. The Ni, Co and Mn of the cathode scrap were mainly recovered as hydroxide precipitates (Ni-Co-Mn precipitates I andⅡ)with minor loss in the residue solution (Table S9).In the process to separate Ni-Co-Mn precipitateⅠand Al foil, it was found that about 0.005 wt.% Ni-Co-Mn was lost as the impurity of Al foil (Table S7). 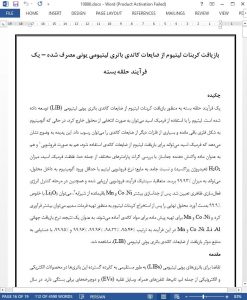 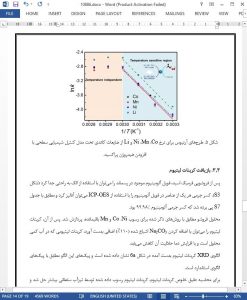 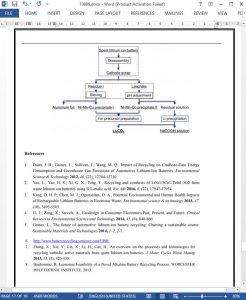