This study proposed a new strategy based on a coaxial tri-capillary electrospray-template removal process for producing nanosized polylactide-b-polyethylene glycol (PLA-PEG) particles with a core–shell structure. Microparticles with core–shell–corona structures were first fabricated by coaxial tri-capillary electrospray, and core–shell nanoparticles less than 200 nm in size were subsequently obtained by removing the PEG template from the core–shell–corona microparticles. The nanoparticle size could be modulated by adjusting the flow rate of corona fluid, and nanoparticles with an average diameter of 106 ± 5 nm were obtained. The nanoparticles displayed excellent dispersion stability in aqueous media and very low cytotoxicity. Paclitaxel was used as a model drug to be incorporated into the core section of the nanoparticles. A drug loading content in the nanoparticles as high as 50.7 ± 1.5 wt% with an encapsulation efficiency of greater than 70% could be achieved by simply increasing the feed rate of the drug solution. Paclitaxel exhibited sustained release from the nanoparticles for more than 40 days. The location of the paclitaxel in the nanoparticles, i.e., in the core or shell layer, did not have a significant effect on its release.

Drug delivery carriers can be fabricated using several techniques, such as emulsion-solvent evaporation, microfluidic systems, self-assembly and electrospray [1–4]. Of these techniques, the electrospray method has several unique advantages. For example, monodispersed particles can be produced using the cone-jet mode of the electrospray technique, and the particle size can be easily controlled by adjusting the preparation parameters [5–7]. In addition, either hydrophobic or water-soluble drugs can be facilely loaded into electrosprayed particles with high entrapment efficiency [8–12]. Furthermore, core–shell structured particles can be conveniently obtained through coaxial electrospray [4,13]. Compared with the emulsion-solvent evaporation method, which has frequently been used for encapsulating protein drugs into biodegradablemicroparticles, coaxial electrospray can preserve the structural integrity and bioactivity of protein drugs because there is no direct contact between the proteins and organic solvent during the electrospray process [14,15]. Multidrug encapsulation and multishell encapsulation can also be achieved using tri-capillary coaxial electrospray [10,16,17]. The release profiles of encapsulated drugs can be independently modulated by changing the internal structure and compositions of the particles [11].

In summary, core–shell PLA-PEG nanoparticles approximately 100 nm in size were successfully produced using a coaxial tricapillary electrospray-template removal method. The particle size could be modulated by adjusting the flow rate of the corona fluid. The nanoparticles had good dispersion stability in water and very low cytotoxicity. In addition, PLA-PEG nanoparticles could be enriched around the nucleus of A549 cells but not in the nucleus. PTX could be incorporated into nanoparticles with both a high drug loading content and entrapment efficiency. A sustained release of PTX from the nanoparticles could be achieved for more than 40 days. The proposed strategy for fabricating nanosized core–shell particles is promising for nanomedicine applications. 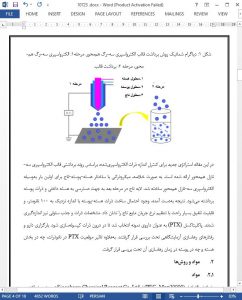 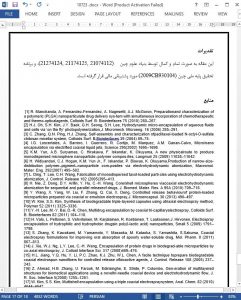