The aim of this study was to investigate the impact of dietary crude protein (CP) levels and calcium salts of long-chain fatty acids (CSFA) on the nutrient intake and digestibility, nitrogen deposition, rumen fermentation characteristic and microbiota, plasma biochemical indexes and fatty acid composition in the Holstein bulls. Eight Holstein bulls was used in a 4 × 4 Latin Square design with 2 × 2 factorial diets, including two levels of CP (133 or 112 g/kg dry matter), and with or without 2.32 g/kg CSFA. The high CP level diets increased the CP intake and the CP apparent digestibility and the urinary nitrogen excretion (P = 0.001). Dietary supplementation with CSFA promoted the apparent digestibility of organic matter (P = 0.012). The diets of CSFA and high CP level raised the rumen ammonia nitrogen concentration (P = 0.009), and enhanced the isovalerate and valerate concentrations, respectively. The high CP diets improved the abundance of Butyrivibrio fibrisolvens (P = 0.037) and Megasphaera elsdenii (P = 0.023), while the CSFA reduced the abundance of methanogens (P = 0.047). High CP increased urea concentration (P = 0.008). Dietary supplementation with CSFA increased the cholesterol and the low-density lipoprotein cholesterol concentration in the plasma, and the proportion of C16:0, C18:1n9c and Δ9 desaturase C18, while it reduced the ratio of C21:1 and C22:0. The low CP diets reduced the protein waste and environmental pollution in the final stage of fattening Holstein bulls. Further study needs to be done to investigate the effect of CSFA on the CH4 emission in terms of microbial mechanism in the rumen.

Based on the results of our observations, we suggested that the low protein diets reduced protein waste and environmental pollution in the final stage of fattening Holstein cattle at 20 months. However, high CP diets increased Butyrivibrio fibrisolvens and Megasphaera elsdenii population, which participate in bio-hydrogenation and cellulolytic. Dietary supplementation with CSFA enhanced the OM apparent digestibility and the isovalerate concentration. It also can partially improve the percentage of unsaturated fatty acids in plasma, but not influence the proportion of C16:0 and C18:2n6c. The CSFA inhibited the methanogens population. Further study needs to be done to investigate the microbial mechanism of the CSFA effect on the CH4 emission in the rumen. 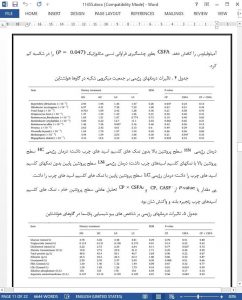 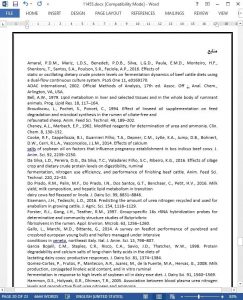