Reasons for performing study: The degradation of glycogen and its two forms, proglycogen (PG) and macroglycogen (MG) has been studied in horses performing different types of exercise, but no information is available about the resynthesis of PG and MG after exercise.

Objectives: To determine the resynthesis of PG and MG in skeletal muscle after intermittent uphill exercise.

Methods: At a training camp 9 well-trained Standardbred trotters performed a training session comprising a warm-up period, 7 repeated 500 m bouts of exercise on an uphill slope and a recovery period. Muscle biopsies (m. gluteus medius) for analysis of PG, MG, glucose and glucose-6-phosphate were taken at rest, at the end of exercise and 1, 4, 8, 24, 48 and 72 h post exercise. Blood samples for analysis of glucose, lactate and insulin were collected before exercise, immediately after the last bout of exercise and then as for the muscle biopsies.

Results: The MG and PG concentration pre-exercise was 311 ± 47 and 305 ± 55 mmol/kg dwt respectively. The exercise caused a decrease in PG (Δ 63 ± 26 mmol/kg dwt) and MG (Δ 136 ± 68 mmol/kg dwt). Immediately after the last sprint plasma glucose and lactate increased compared to values pre-exercise. During the first hour post exercise there was a further decrease in MG in 7 out of 9 horses. The rate of glycogen resynthesis during 1–24 h was higher for MG than for PG. The rate of muscle glycogen resynthesis thereafter was slower and did not differ between MG and PG up to 72 h.

Potential relevance: If the time between exercise sessions during training is too short the recovery period will be inadequate for complete restoration of muscle glycogen. 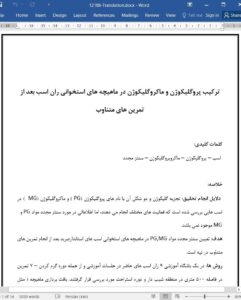 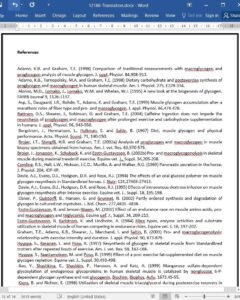