The relationship between the cold spray deposition mechanism, microstructure, and strength of the resulting film must be understood for this innovative process to be practical. Previous studies have suggested that the coating mechanism is reliant on breaking the natural oxide film such that metallic bonding occurs through direct contact between the metal surfaces. In this study, the proposed model was experimentally verified by a small tensile adhesion test and auger electron spectroscopy analysis of the bonding interface. Since shear deformation does not occur at the tip (south pole) of the incoming particle, the oxide film is not broken, such that the bonding strength is weak. In contrast, at the outer edge of the particle, metallic bonding occurs, attaining a level of strength that exceeds that of the base material due to the huge plastic deformation. This phenomenon is known as the “south-pole problem,” and can lead to a decrease in the overall adhesion strength despite the local adhesion being strong. However, detailed observations revealed, in parts of the deposits,particles that had adhered across their entire surface. This suggests that, provided the collision state can be controlled, it is possible to overcome the south-pole problem and improve the adhesion strength.

The cold-spray (CS) method is a completely new particle deposition method [1–3]. The most important feature of this method is that the particles are not melted. That is, metallic particles with a diameter of several micro-meters to several tens of micro-meters impact a substrate and, while remaining solid, form a deposit that can be built up into a layer with a thickness of several tens of micro-meters to several centimeters. The process does not involve the melting of the metal, and offers many advantages as a result of being fundamentally different from conventional thermalspraying methods. Therefore, it is expected to be adopted as a next-generation surface-modification and additive manufacturing technology [4,5].

The interfacial adhesion strength of a cold-sprayed copper deposition on an aluminum substrate was measured by performing tensile tests. These tests exposed the bonding interface, produced by the adhesion tests, with the results being superior to those of elemental analysis.

Elemental analyses were performed on the fracture surfaces using an AES analyzer, which offers a much better resolution than the SEM-EDX method, and the relationship between the state of the thin natural oxide film at the interface and the adhesion strength was evaluated. 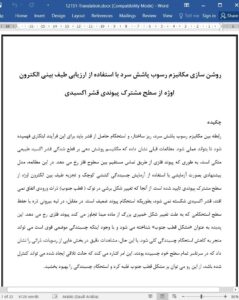 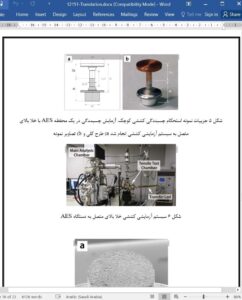 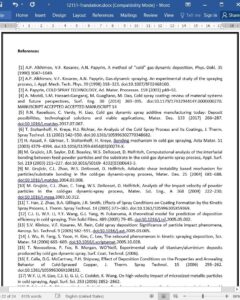