This paper describes a new framework for the design of a sliding surface for a given system while multi-channel H2 performances of the closed-loop system are under control. In contrast to most of the current sliding surface design schemes, in this new method the level of control effort required to maintain sliding is penalised. The proposed method for the design of optimal sliding mode control is implemented in two stages. In the first stage, a state feedback gain is derived using an LMI-based scheme that can assign a number of the closed-loop eigenvalues to a known value whilst satisfying performance specifications. The sliding function matrix related to the particular state feedback derived in the first stage is obtained in the second stage by using one of the two different methods developed for this goal. The proposed theory is evaluated by using numerical examples including the problem of steady state output tracking via a state-feedback SMC for flight control.

Sliding mode control (SMC) is a control method which, due to its robustness properties against matched uncertainties, has progressively been used in different applications (Argha, Li, Su, & Nguyen, 2016b; Edwards, 2004; Edwards & Spurgeon, 1998; Herrmann, Spurgeon, & Edwards, 2001; Hu, Wang, & Gao, 2008; Utkin, 1992). Roughly speaking, all the traditional SMC design methods consist of two separate stages. In the first stage, an appropriate sliding surface is chosen so that it can guarantee a reduced-order sliding motion with suitable dynamics. Many approaches have been developed for this goal; for example, pole placement and optimal quadratic (Edwards & Spurgeon, 1998), and linear matrix inequality (LMI) methods (Argha, Li, Su, & Nguyen, 2016a; Choi, 2002; Herrmann et al., 2001; Park, Choi, & Kong, 2007). Following this, the second stage designs a controller to persuade and retain the sliding motion. However, these traditional design methods are unable to limit the available control action required for satisfying the control objective. This is because, during the switching function synthesis, there is no sense of the level of the control action required to persuade and retain sliding (Edwards, 2004). If no limits are considered on the control actions during the design procedure, a very impractical switching surface and thereby control law may always be derived, as the high level of control efforts may be required to reach the sliding surface and maintain there thereafter. 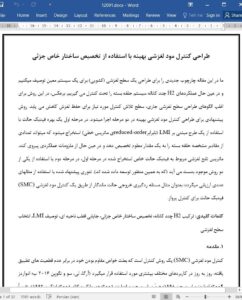 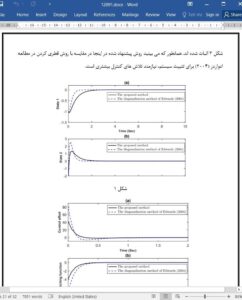 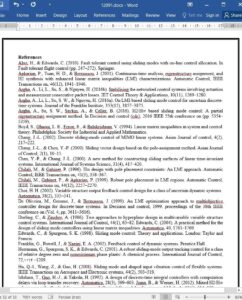