Gesturing is an instinctive way of communicating to present a specific meaning or intent. Therefore, research into sign language interpretation using gestures has been explored progressively during recent decades to serve as an auxiliary tool for deaf and mute people to blend into society without barriers. In this paper, a smart sign language interpretation system using a wearable hand device is proposed to meet this purpose. This wearable system utilizes five flex-sensors, two pressure sensors, and a three-axis inertial motion sensor to distinguish the characters in the American sign language alphabet. The entire system mainly consists of three modules: 1) a wearable device with a sensor module; 2) a processing module; and 3) a display unit mobile application module. Sensor data are collected and analyzed using a built-in embedded support vector machine classifier. Subsequently, the recognized alphabet is further transmitted to a mobile device through Bluetooth low energy wireless communication. An Android-based mobile application was developed with a text-to-speech function that converts the received textinto audible voice output. Experiment results indicate that a true sign language recognition accuracy rate of 65.7% can be achieved on average in the first version without pressure sensors. A second version of the proposed wearable system with the fusion of pressure sensors on the middle finger increased the recognition accuracy rate dramatically to 98.2%. The proposed wearable system outperforms the existing method, for instance, although background lights, and other factors are crucial to a vision-based processing method, they are not for the proposed system.

In this study, we successfully designed and implemented a novel and smart wearable hand device as a sign interpretation system using a built-in SVM classifier. An Android-based mobile application was developed to demonstrate the usability of the proposed smart wearable device with an available text-to-speech service. The participating subjects gave a high rating to the proposed smart wearable sign interpretation system in terms of its comfort, flexibility, and portability. The device holders were 3D-printed using a flexible filament, and the same holders are able to fit different hand and finger sizes, thus eliminating the necessity of custom-made devices. Future work on the proposed smart wearable hand device will consider the design of a smaller sized printed circuit board, the inclusion of words and sentences at the sign language level, and instantly audible voice output components. 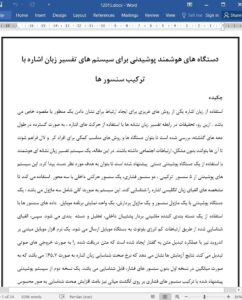 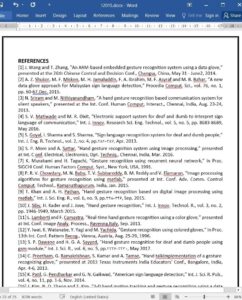