This paper investigates and analyzes a new application of two types of controllable series compensators, GCSC and TCSC, in fixing a bus voltage feeding a sensitive load. After introducing the operation principles of the GCSC and TCSC, it is revealed that the studied system provides good performance neither without compensation nor with series compensation with a fixed capacitor. Then, it is shown that if controllable compensators are used, it is possible to prevent voltage variations of the bus that feeds the sensitive load. Finally, a comparison is made between the rating of the components of the GCSC and TCSC, which results indicate the superiority of the former. In this study, all time-domain simulations are done using MATLAB/Simulink.

In the power system, power quality has great importance for electrical equipment and end consumers. For sensitive loads, this issue is becoming more and more of a concern, so all discussions about the reliability of power systems should include the issue of power quality. The definition of power quality is generally based on holding the voltage of the system on a nominal range, nominal frequency, and sinusoidal waveform [1]. In recent years, the injection of reactive power into transmission lines has been used to improve the power quality problem in feeding specific loads and increasing the power capability of transmission lines using series and parallel compensators. In this regard, the use of series compensators is preferable to parallel compensators. One of the most important reasons for this superiority is the lower sensitivity of the series compensators to the load characteristics of the system and the position of the equipment in the transmission line [2].

In this paper, the application and control of two types of controllable namely GCSC and TCSC in fixing a bus voltage feeding a sensitive load voltage were investigated. Simulation results show that if the controller is designed properly, these compensators can stabilize the load voltage and prevent it from variations. Finally, a comparison was made between these two types of controllable series compensators, which resulted in GCSC superiority over TCSC. 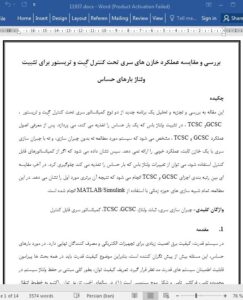 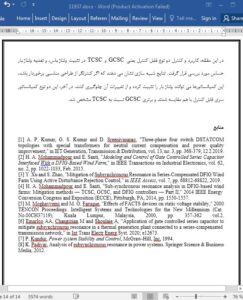