The standard particle filter (PF) algorithm has the issue of particle diversity loss caused by particle degradation and resampling, which makes it impossible for particle samples to accurately represent the true distribution of state probability density function. Particle swarm optimization (PSO) algorithm can effectively improve the particle degradation problem of particle filter namely, PSO-PF, but its fitness function is greatly affected by the variance of measurement noise, and is easy to fall into local optimal, which greatly limits the filtering accuracy. Therefore, this paper proposes an algorithm that combines genetic algorithm (GA) and PSO algorithm to improve particle filtering, namely, GA-PSO-PF. This algorithm combines the fast convergence speed of particle swarm optimization with the strong global searching ability of genetic algorithm to increase the diversity of particles while ensuring the effectiveness of superior particles, and improve the speed and accuracy of finding the optimal solution. Experimental results show that the filtering performance of the proposed algorithm is better than PF and PSO-PF, and the positioning and tracking accuracy is improved by 54.44% compared with PF and 27.20% compared with PSO-PF.

Particle filtering (PF), also known as the Sequential Monte Carlo method, the core idea of which is to approximate the probability density function of the system with some discrete random sampling points to obtain the minimum variance estimation of the state[1]. Not limited by the linear system model and Gaussian distribution hypothesis, it has been widely used in computer vision [2], image processing [3] and radar target tracking [4] fields. The schematic diagram of the algorithm is shown in Figure 1. However, the standard particle filter algorithm has the problem of particle degradation [5], some researchers have proposed a series of improvement methods. Rudolph et al. [6] introduced the Unscented Kalman Filter (UKF) method into Particle filtering and proposed the Unscented Particle Filter (UPF). Many researchers have also used some intelligent algorithms to optimize the particle filter algorithm[7][8][9]. 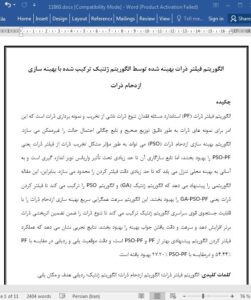 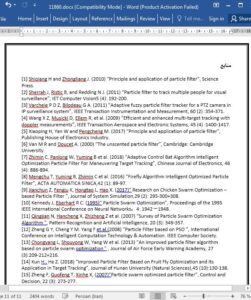