THIS paper is concerned with an analysis and criticism of what have come to be known as "culture and personality" writings, including among others the work of Benedict, Mead, Gorer, Kluckhohn, DuBois, Linton, La Barre, Erikson, and Kardiner. The scholars who have contributed to this movement have a common general orientation although some differences of opinion and emphasis exist.' One wing of the movement includes psychoanalytically trained persons like Fromm, Erikson, and Kardiner. Another wing, represented by a writer like Benedict, places the main emphasis upon descriptions of cultural configurations and personality types, but puts relatively little emphasis upon genetic explanations or on psychoanalytic concepts. Most of the writers fall between the extremes, using a sprinkling of psychoanalytic terminology, sometimes in combination with ideas derived from other areas.

The bulk of this paper has been concerned with negative criticisms, raised by us and others, concerning the conclusions, evidence, methods, and general conceptual framework offered and used by culture-personality writers. These criticisms seem to us to indicate quite clearly that available evidence offered by the writers in support of their conclusions is inadequate and does not justify their conclusions. Positive generalizations made in this area are generally based upon unwarranted confidence in rather loose unscientific methods of interpreting data, and upon a relatively uncritical acceptance of a particular conceptual scheme 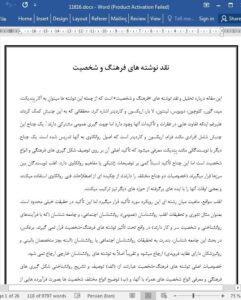