Many foreign jurisdictions of both civil and common law traditions have long recognised an obligation to act in good faith when making and performing contracts. Historically, this was not an approach recognised by the English courts. Rather, English law was said to have "committed itself to no... overriding principle [of good faith] but has developed piecemeal solutions in response to demonstrated problems of unfairness". 1

The absence of a general, overriding duty to act in good faith does not however, mean that this is not an issue with which English courts have had to grapple. EU legislation frequently imposes such a duty on contracting parties, 2 whilst the common law also recognises a duty to act in good faith in certain specific types of contract eg contracts of employment or insurance. What is more, the Courts will enforce express contractual terms that parties are to act in good faith and it would now seem in light of the decision in Yam Seng Pte Ltd (a company registered in Singapore) v International Trade Corporation Ltd3 ('Yam Seng') that they are also willing to imply such terms into commercial contracts in certain circumstances.

This article focuses on the last two of those eventualities, namely express and implied contractual obligations to act in good faith, and it does so with reference to a number of decisions of the last two years. 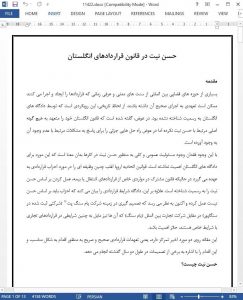