A low-cost subsurface irrigation system can generate benefits for small-scale farmers who have scarce water resources. A ring-shaped emitter made from a standard rubber hose has been developed and introduced for subsurface irrigation in Indonesia. It is a low-cost irrigation technology based on indigenous materials and skills. To build a ring-shaped emitter of the original design, a rubber hose is bent into a ring shape with a diameter of about 20 cm, and then five 5-mm holes are drilled into it at even intervals. Next, the entire ring-shaped hose is covered with a permeable textile so that water can infiltrate in all directions around the buried emitter. Water is applied from a water tank connected to the emitter by adjusting the pressure head imposed at the inlet of the emitter. Although it has been successfully used in practice, the performance of the ring-shaped emitter has not been evaluated in detail. Additionally, because the ring-shaped hose is fully covered with the textile, it may be difficult to detect any malfunctions or repair it. To promote the ring-shaped emitter for subsurface irrigation among small-scale farmers in arid or semi-arid regions, it is important to design an emitter that is easy to maintain. This study proposes a reduction in the number of holes and a change of covering method. Because the number of experiments that can be carried out to evaluate the performance of alternative ring-shaped emitters is usually limited, numerical simulations can be performed in addition to experiments. The main objectives of this study thus were 1) to experimentally investigate the water movement around a buried ring-shaped emitter and 2) to numerically evaluate the effect of modifying the design of the ring-shaped emitter on soil water dynamics around the emitter. Numerical simulations were carried out using HYDRUS, one of the most complete packages for simulating variably-saturated water flow in two- or three-dimensional domains. HYDRUS simulations in a fully three-dimensional domain were performed using the soil hydraulic parameters that were optimized against experimental data collected during experiments with the original ring-shaped emitter. Simulation results confirmed that reducing the number of holes does not significantly affect the water availability in silt for model plants, such as tomato and strawberry, and that covering the entire emitter is not necessary. Partially covering the emitter allows one to maintain the emitter much more easily compared to the original fully-covered emitter.

The experimental results showed that water moved radially around the emitter in silt, while downward water movement was dominant in sand when water was applied using the buried ring-shaped emitter. The difference in the flow pattern can be attributed to the difference in the macroscopic capillary length of the soil, which can be interpreted as a measure of the contribution of capillarity as opposed to gravity’s effect on unsaturated water movement. HYDRUS, a model simulating variably-saturated water flow in porous media, was then calibrated using the experimental data collected from the experiments with the 1-cm inlet pressure head. The calibrated soil hydraulic parameters were used to simulate changes in soil water contents (SWCs) for the experiments with the 5-cm inlet pressure head. While SWCs were predicted well for silt, SWCs above the buried emitter were overestimated and those directly below the emitter were underestimated for sand. Although the fitted saturated hydraulic conductivity for sand was too small, this result indicates that downward water movement was predominant, suggesting the occurrence of preferential flow. 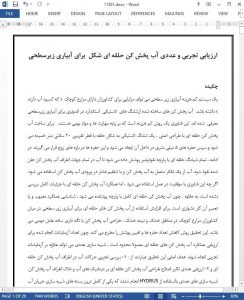 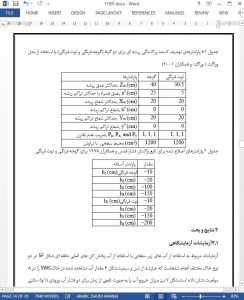 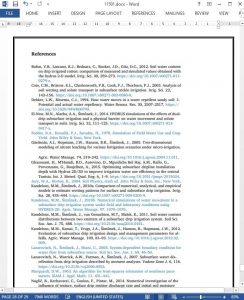