The method of estimating origin-destination matrices of correspondence using observational data on traffic flows based on the Markov chain theory is considered in this paper. The method is based on the transportation network, which is associated with the graph of the corresponding Markov chain and on the canonical form of the graph proposed. The classification of observation models on flows in a transportation network is provided. The properties of the method proposed are investigated on several simple networks. The recommendations for the practical application of the method proposed in real transportation networks are given.

Mathematical equilibrium models of traffic flows are widely used to support decision-making process in the management of transport systems of large cities, agglomerations. The development of these models can be divided into two stages. The first stage is to estimate origin-destination (OD) matrices based on the initial data. At the second stage the origin-destination matrices obtained are distributed to the transportation network. Elements of an OD matrix area total number of users moving from one point of the transportation network to another. The problem of obtaining origin-destination flows is that they are not explicitly observable, and we have to find them indirectly. Different methods that depend on the initial data are commonly used to estimate OD flows. And all methods can be divided into 2 classes. The first class includes gravity and entropy models described by Vasil’eva et al. (1981) and by Wilson (1967). The gravity model is used by analogy with the famous law of gravitation; the entropy model is based on a maximum entropy method. A significant disadvantage of these methods is that they are described by a common function whose parameters are determined based on the mobility of the population, i.e. the indirect information about movements of citizens.

In this paper the OD matrix estimation method based on the representation of the network as a Markov chain was proposed. Models of observation on traffic flows on the network were considered. The OD matrix estimation method is based on a canonical decomposition of a transition matrix of a Markov chain. If observations obtained according to the observation models 2 – 4 are available, it is possible to apply the method proposed to estimate origin-destination flows and, which is connected to the estimation of indirect transition probabilities of the chain using its fundamental matrix. 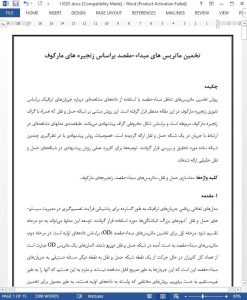 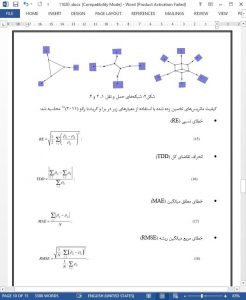 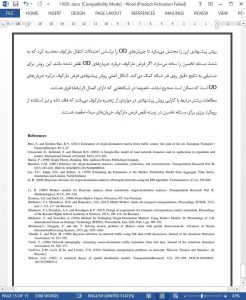