Different studies show that projects tend to be delayed. For one project this is a challenge, but for the portfolio manager managing hundreds of large projects, delays can add up to significant problems. This case study is based on data measuring more than 2000 milestones over a period of more than six years, covering a multi-billion dollar business that runs 200-300 large projects every year. This paper will address strategies for governing portfolios despite delays. Analyzis of the milestone delays show reoccurring patterns, which is made into information used to govern. In the five different business areas analysed, the pattern of delays were found to be similar. The curves showing relative milestone achievement repeat themselves year after year, producing tendency curves. Since the portfolio manager expects this behavior he uses the information to govern the project portfolio cash flow. The data are unique, but we think the measured tendencies indicate some sort of global tendencies. Despite relative large delays in the portfolio the portfolio manager manages to meet the budget. Success on project level is not necessarily the same as success governing a portfolio.

Delays in projects are a global phenomenon and have become a typical part of the project manager’s concern. Projects are delayed for a variety of reasons. Zidane et al. (2015) lists a number of reasons mentioned in the literature. Articles discussing delay factors suggest that reasons often are more external than internal. The articles surveyed (ibid) point to reasons such as construction environment, working cultures, management style, methods of construction, geographical condition, stakeholders, government policy, economic situation, and availability of resources, to name a few. This paper is based on objective data analysis and looks into inherent problems that project managers often face. The article is based on the fact that delays in a large portfolio can be foreseen and strategies to govern the effect of delays can be implemented.

The strategic goal is to be on budget. The portfolio manager governs the portfolio based on characteristics which are expected, measured and analyzed every month. Despite delays, the economic target is reached. Projects success is not necessarily the same as success governing a portfolio.

From the case study there are at least two issues we believe should be focused on. The first is the data that shows us how milestones tend to move within a year under the same set of rules. It shows that the portfolio drops to a level of 60-65 % of milestone achievement after 5-6 months, to a total mean of 70 %. For the manager governing the portfolio, this tendency is known and strategies to avoid budget underperformance can be planned well in advance. During the year the milestones give indications if something deviates from the norm. 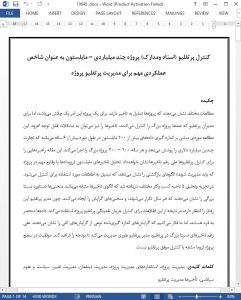 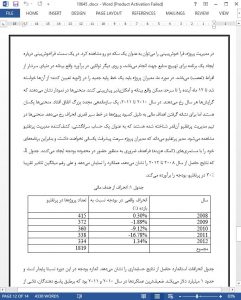 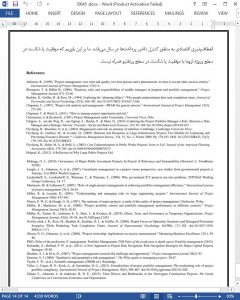