The view that science and religion are complementar 3, has at least one significant advantage over other positions, such as the view that they are in an antagonistic relationship or the view that they are so incommensurable that they are neither complementary" nor antagonistic. The advantage is that it aspires to provide a unified worldview that is sensitive to the claims of both science and religion. And surely, such a worldview, if available, would seem to be superior to one in which, say, scientific and religious claims were held despite their obvious contradictions. Given this, it should come as no surprise that many religious thinkers have been attracted to the view that science and religion are complementar3,. Here, I wish to consider a cluster of arguments exemplifying this position: namely, 'new design arguments' for the existence of God. These arguments rely directly on developments in late twentieth-century natural science in attempting to establish their conclusions. One question that will need to be addressed is: To what extent are they susceptible to the criticism that they only succeed by distorting the religious beliefs they claim to champion?

But before we examine new design arguments, it would be wise to consider first of all the traditional arguments from design, and note some of the problems they have faced.

Traditional Design Arguments for the Existence of God

Arguments from design consist in deducing the existence of God on the basis of evidence that the world must have been designed by an intelligent being. Traditional design arguments rely upon our ability to recognise the place that particular natural objects purportedly occupy within the context of the providential design of the whole. Such arguments are developments of an idea that appears in the scriptures of each of the Abrahamic faiths. In the Hebrew Scriptures, for example, one reads: 'The heavens declare the glory of God, the sky proclaims His handiwork') Likewise, the Qur'an proclaims:

In the creation of the heavens and the earth; in the alternation of night and day; in the ships that sail the ocean with cargoes beneficial to man; in the waters which Allah sends down from the sky and with which He revives the dead earth, dispersing over it all manner of beasts; in the movements of the winds, and in the clouds that arc driven between earth and sky: surely in these there are signs for rational men 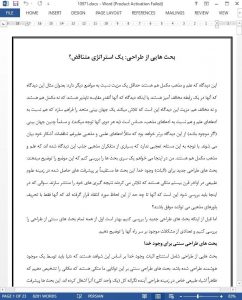 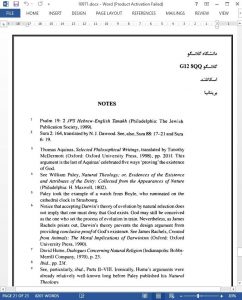