In the Netherlands, in approximately 30% of the more serious criminal cases, a pretrial forensic mental health report (FMHR) is requested to inform the court whether a mental disorder was present at the time of alleged crime, whether this disorder affected behavior and decision-making at the time of the offense and how this disorder may affect future (criminal) behavior. While informative for sentencing decisions, information about mental disorders or risk is irrelevant for the question whether the defendant committed the alleged crime. Yet based on cognitive psychological theory of evidence evaluation and integration, we hypothesized that information in an FMHR would affect the evaluation of evidence as well as the ultimate decision about guilt. Using an experimental vignette study among 200 law and criminology students with manipulation of the presence and content of an FMHR, we found a main effect of the presence of an FMHR report on decisions about guilt. The proportion of guilty verdicts increased with almost 20% when an FMHR was present compared to when this report was absent, irrespective of the type of disorder (schizophrenia or personality disorder) or level of recidivism risk (low or high) present in the report. We did not find support for our hypothesis that this effect could be explained by assimilation of other available evidence. Implications for further research and practice are discussed.

Mentally ill people are overrepresented in the criminal justice system and mental illness is more prevalent among prisoners than in the general population (Fazel & Danesh, 2002; Fazel, Hayes, Bartellas, Clerici, & Trestman, 2016). In the United States, for instance, more mentally ill individuals are detained than admitted to mental health hospitals or treatment facilities (Fuller Torrey, Kennard, Eslinger, Lamb, & Pavie, 2010). Consequently, people with mental illness are profoundly prevalent in criminal procedures and information regarding mental illness can have a significant role in criminal trials. In the Netherlands, in approximately 30% of the more serious criminal cases, a pretrial forensic mental health report (FMHR) is requested to inform the court (Nederlands Instituut voor Forensische Psychiatrie en Psychologie, 2020; Nederlandse Vereniging voor Psychiatrie, 2013). Forensic mental health experts evaluate whether a mental disorder was present at the time of the alleged crime, whether this disorder affected behavior and decisionmaking at the time of the offense and how this disorder may affect future (criminal) behavior. This evaluation results in advice on criminal responsibility1 (three degrees: no responsibility, diminished responsibility, full responsibility), an indication of recidivism risk and advice on possible treatment measures (e.g. Hummelen & van der Wolf, 2018; see Koenraadt, 2010 for an English overview of this evaluation; van Marle, Mevis, & van der Wolf, 2013).

We demonstrated that the mere presence of an FMHR, regardless of its content, can bias decisions in favor of guilt. This implicit bias requires further research into its underlying cognitive mechanisms as well as into the generalizability to other types of disorders, types of crime and jurisdictions. Since people with mental illness are frequently present in criminal procedures, research is necessary to determine the extent of potential effects of bias by an FMHR on decisions about guilt to gain more insight in factors that are relevant in these decisions. This is important to prevent wrongful convictions and increase legitimacy and credibility of judicial decision-making. 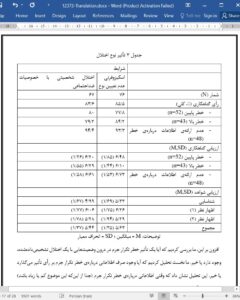 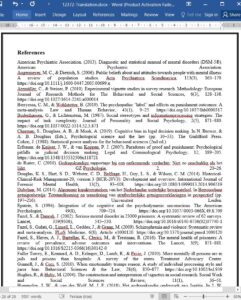