Over the last decade, wind energy has taken an increasingly important place in the field of electric energy generation. This kind of energy source is developed due to the global growing of electricity demand and the trend towards renewable and non-polluting energy sources in the world [1]. Indeed, in wind energy conversion system (WECS), the maximum wind power could be extracted when the tip-speed-ratio of the turbine is maintained at its optimum value for different wind speed patterns [2]. Thus, it is necessary to develop more advanced control strategies for WECS. To this end, several control methods have been designed and implemented for wind energy generation such as, vector control which is based on voltage and flux oriented vector using the d-q rotating frame to decouple the active and reactive power, [3, 4]. In fact, this strategy is sensible to parameters variations of the system such as resistance and inductance variations. To overcome this problem, direct torque control (DTC) has been introduced by [5, 6] to directly control generator torque and stator flux using a predefined lookup table based on the estimation of the stator flux and electromagnetic torque. Direct power control (DPC) proposed in [7], has used the same concept of the DTC method. DPC control strategy is based on decoupling and direct control of reactive and active power [8]. In fact, the non-linear behaviors of mechanical and electrical parts of WECS as well as variations of electromechanical parameters represent crucial problems [9]. In addition, wind turbine (WT) works under high wind speed variations, which makes its control a serious challenge [10]. As result, several nonlinear control techniques have been developed in the literature for WT, such as fuzzy logic [11], neural networks [12], and high-order sliding mode control [13]. 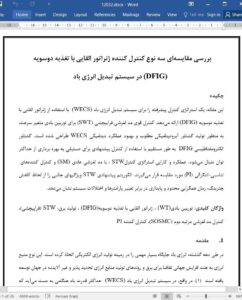 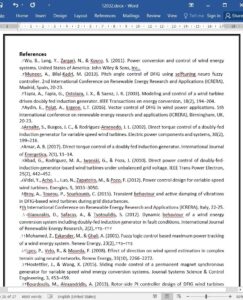