We consider a model of congestion for computer networks based on a continuous-time finite-state homogeneous bivariate Markov chain. The model can be used to evaluate, via computer simulation, the performance of protocols and applications in a network with random path delays and packet losses due to traffic congestion. Only one of the processes of the bivariate Markov chain is observable. In our application, that process represents the dynamics of traffic congestion along a network path in terms of packet delay or packet loss. The other is an underlying process which affects statistical properties of the observable process. Thus, for example, the interarrival time of observed events is phase-type. The general form of the bivariate process studied here makes no assumptions on the structure of the generator of the chain, and hence, neither the underlying process nor the observable process is necessarily Markov. We present an expectation-maximization procedure for estimating the generator of a bivariate Markov chain given a sample path of the observable process. We compare the performance of the estimation algorithm to an earlier approximate estimation procedure based on time-sampling.

We considered a model of network congestion based on a finite-state continuous-time bivariate Markov chain and developed explicit forward-backward recursions for estimating its parameter in the maximum likelihood sense from observation samples obtained from a real network. The observation or training data consists of packet delay values or packet loss indications obtained by sending probe packets along a network path. The parameter of the bivariate Markov chain model can be used to drive an efficient event-driven simulation for evaluating the performance of network protocols and applications. 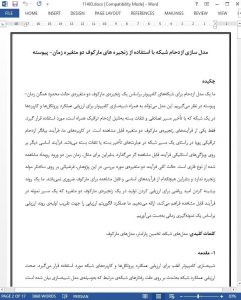