• Only a small subset of HSV-1 miRNAs is expressed in latently infected human TGs.

• We revised the sequences of HSV-1 miRNAs.

Human herpes simplex virus 1 (HSV-1) expresses numerous miRNAs, the function of which is not well understood. Several qualitative and quantitative analyses of HSV-1 miRNAs have been performed on infected cells in culture and animal models, however, there is very limited knowledge of their expression in human samples. We sequenced small-RNA libraries of RNA derived from human trigeminal ganglia latently infected with HSV-1 and Varicella zoster virus (VZV) and detected only a small subset of HSV-1 miRNA. The most abundantly expressed miRNAs are miR-H2, miRNA that regulates the expression of immediate early gene ICP0, and miR-H3 and –H4, both miRNAs expressed antisense to the transcript encoding the major neurovirulence factor ICP34.5. The sequence of many HSV-1 miRNAs detected in human samples was different from the sequences deposited in miRBase, which might significantly affect targeted functional analyses.

Investigating HSV-1 miRNAs is experimentally very challenging due to several reasons. First, relevant human samples are difficult to obtain, and latency is established in only a small number of cells of the entire sample. Animal models are well-accepted alternative; however, we have observed that the pattern of HSV-1 miRNA expression does not entirely match the human analysis. For example, miRH6, which was repeatedly found in latent neurons in mice (Du et al., 2011; Jurak et al., 2010; Kramer et al., 2011), but barely detectable in human samples ((Umbach et al., 2009) and this study) might represent only a reminiscent of the productive infection or reactivation in ganglia; i.e. it might represent a miRNA with roles in productive infection like miR-H1. On the other hand, in vitro latency models are difficult to establish and not well characterized yet. In conclusion, our limited study indicates that miRNAs are conserved among HSV-1 strains, however more basic investigations are needed, particularly comparative analysis of clinical samples, to completely understand the fundamentals of HSV-1 miRNA expression. 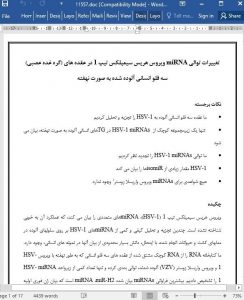 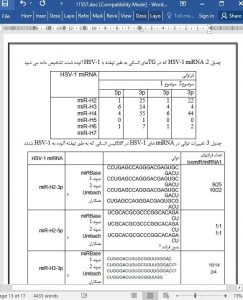 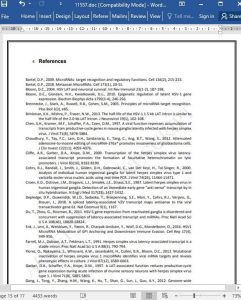