A numerical analysis of a composite internally pressurized cylindrical vessel with spherical domes is presented. The structure is considered a filament winding process vessel in which a continuous strand of fiber is wound over a rotating male mandrel. During the winding process a variable thickness is created in the dome region which considerably alters its mechanical performance. Additionally, the fiber path depends on the surface where the fibers are wound; as a result the winding angle varies in the dome with regards to its longitudinal direction. The vessel is modeled as a non-structural internal liner reinforced with an orthotropic composite: carbon fiber reinforced plastic. Stress was calculated by applying the first-order shear deformation theory, and the Tsai-Wu failure criterion was considered as the limit state function of the laminate. The structure’s optimum design is performed taking into account the main process variables, the winding angle and layer thickness. A finite element analysis was performed considering the winding angles as well as the thickness change through the dome, in order to study the effects of the winding process variables on the mechanical behavior of the composite vessel. A convergence study was carried out in order to verify the finite element analysis. It considered several shell element types. In order to model the structure, quadrilateral stress/displacement shell elements with 8-nodes (6-degrees of freedom each), quadratic interpolation and reduced integration were used.

Fiber reinforced composite materials are generally used in highly-efficient structures such as aircraft, automotive parts and pressure vessels due to their high specific strength and stiffness. Pressure vessels can be widely observed in civilian industries for instance in fire extinguishers, oxygen gas tanks, natural gas cylinders, etc. A common feature among these products is that they must withstand high pressure under working conditions, while considering an appropriate standard safety factor [1]. The vessels are generally made through a filament winding process, in which continuous resin-impregnated rovings or tows are wound over a rotating male mandrel. The mandrel can be any shape that does not have reentrant curvature. Its reinforcement may be wrapped either in adjacent or overlapping bands which cover the mandrel’s surface. The technique has the capability of changing the winding tension, winding angle, or resin content in each layer of the reinforcement until the desired thickness of the composite and the required direction of strength is obtained [2].

4 Conclusion Mechanical behavior of a filament winding vessel subject to internal pressure was studied considering the manufacturing process variables. For several design parameters such as winding angle and laminate sequence, Tsai – Wu failure coefficient was calculate as the limit state function of the laminate. Numerical evaluation, by means of the finite element method using ABAQUS program, has indicated a significant influence of both the winding angle change and the thickness variation along the dome. On the other hand, simulation reveals that the stress component in the perpendicular direction to the fiber, S22, rules the vessel failure response. Furthermore, the analysis indicates that the spherical dome is the vessel critical zone, mainly around central zone where polar angle takes values between 35° and 50°. Although the methods used in this study are theoretical, their accuracy must be verified by experimental data. The experimental data can be evaluated by means of strain gages. Furthermore, to study the composite vessel failure behavior a burst pressure test as well as a cycling pressurization test should be considered. 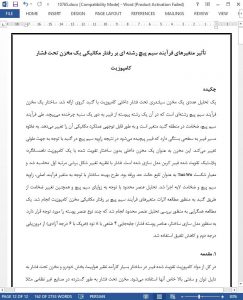 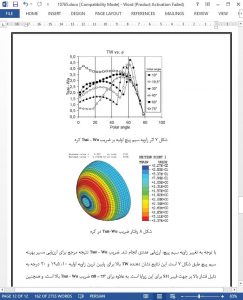 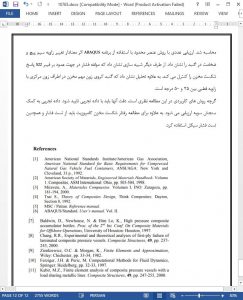