The increasing application of hydroforming for the production of automotive lightweight components is mainly due to the attainable advantages regarding part properties and improving technology of the forming equipment. However, the high pressure requirements during hydroforming decreases the costs benefit and make the part expensive. Another requirement of automotive industries is weight reduction and better crash performance. Thereby steel industries developed advanced high strength steels which have high strength, good formability and better crash performance. Even though the thickness of the sheet to form the component is reduced, the pressure requirement to form the part during expansion is still high during high pressure hydroforming. This paper details the comparison between high and low pressure tube hydroforming for the square cross-section geometry. It is determined that the internal pressure and die closing force required for low pressure tube hydroforming process is much less than that of high pressure tube hydroforming process. The stress and thickness distribution of the part during tube crushing were critically analysed. Further, the stress distribution and forming mode were studied in this paper. Also friction effect on both processes was discussed.

The automotive industry is increasingly interested in mass reduction of vehicles for improved fuel consumption. Hydroforming is a metal forming process that is now widely used as it can achieve weight reduction of about 30% compared to conventionally manufactured components [1]. At the same time automakers are increasingly exploring the potential to use advanced high strength steels, as they can also provide weight reduction without any reduction in other performance characteristics such as crash and durability.

HPTH and LPTH of TRIP 780 steel for the same final geometry is studied. Using finite element simulation pressure and die closing force are found with respect to corner radius. For the analysed part geometry 155 MPa of internal fluid pressure and 4000 N of die closing force is required to form the desired shape during HPTH, while only 10 MPa and 2300 N is required in LPTH. The stress variation and thinning is more pronounced in HPTH than in LPTH. LPTH with t = 1.75 mm gives approximate the same thickness distribution that with t = 2 mm in HPTH. Thus weight reduction and uniform thickness distribution are the main advantage during proposed low pressure tube hydroforming. The stress distribution and forming mode are different in both the processes. During high pressure hydroforming the stress and thinning without friction is less than with friction, thus high pressure hydroforming is sensitive to friction while in case of low pressure hydroforming, friction is not an important parameter. 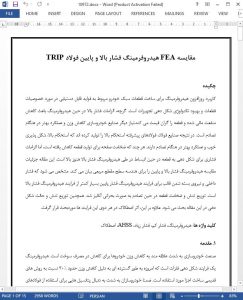 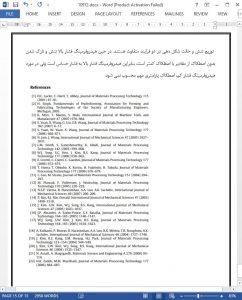