Research Question/Issue This study applies the statistical properties of Benford's Law to CEO pay. Benford's “Law” states that in an unbiased dataset, the first digit values are usually unequally allocated when considering the logical expectations of equal distribution. In this study we question whether the striking empirical properties of Benford's Law could be used to analyze the negotiating power and preferences of CEOs. We argue that performance‐based or market‐ determined compensations should follow Benford's Law, demonstrating no direct negotiation by the CEOs. Conversely, deviation from Benford's Law could reveal CEO negotiating power or even preference.

Research Findings/Insights Our analysis shows that market‐determined “Option Fair Value” (the dollar value of stock options when exercised) conforms closely to Benford's Law, as opposed to “Salary”, which is fully negotiated. “Bonus”, “Option Award”, and “Total Compensation” are generally also largely consistent with Benford's Law, but with some exceptions. We interpret these exceptions as negotiation by the CEOs. Surprisingly, we found that CEOs prefer to be paid in round figure values, especially “5”. We use Benford's Law to study the negotiating powers of CEOs vs. that of other executives. Finally, we compare the negotiating tactics of CEOs before and after SOX and analyze the impact of firm size on their compensation.

Theoretical/Academic Implications This study introduces Benford's Law and its applications within the corporate governance literature.

Practitioner/Policy Implications This method could be used by academics, industry and regulators to uncover compensation patterns within large business departments and/or organizations or even entire industry segments. 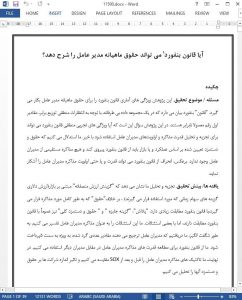 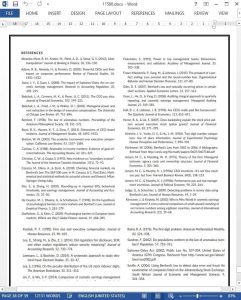