Objective Previous studies investigating the association between nightmares and suicide have yielded different results. We aimed to investigate whether nightmares, directly or indirectly, influence the incidence of suicide.

Methods We used a prospective cohort study, based on 40,902 participants with a mean follow-up duration of 19.0 years. Cox proportional hazards models with attained age as time-scale were fitted to estimate hazard ratios (HR) of suicide with 95% confidence intervals (CI) as a function of the presence or absence of depression and nightmares. Mediation analysis was used to asses to what extent the relationship between nightmares and the incidence rate of suicide could be mediated by depression.

Conclusions Our findings indicate that nightmares have no influence on the incidence rate of suicide, but may reflect pre-existing depression. This is supported by a recent discovery of a strong genetic correlation of nightmares with depressive disorders, with no evidence that nightmares would predispose to psychiatric illness or psychological problems. Interventions targeting both depression and nightmares, when these conditions co-occur, may provide additional therapeutic benefit.

Suicide is a major public health concern with heterogeneous etiology. On an individual level, the interplay between predisposing, mediating, and precipitating factors contribute to the risk of developing suicidal behavior [1]. Improved recognition and understanding of individual factors influencing suicidal behavior may facilitate the detection of high-risk individuals.

Nightmares are terrifying or disturbing dreams, usually involving threats to survival, safety or physical integrity, able to awaken the sleeper [2]. Nightmares can be posttraumatic as part of a posttraumatic stress reaction, idiopathic or drug induced [3]. Frequent nightmares have been related to both general psychopathology [4] and psychiatric disorders, in particular post-traumatic stress disorder [3e5], major depressive disorder [6], schizophrenia [6], and borderline personality disorder [7]. Evidence suggests that nightmares may persist over long periods of time [8e10]. As with other sleep disorders, nightmares have been associated with increased risk of suicidal ideation, suicide attempts and death by suicide [11e20]. 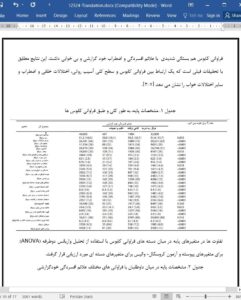 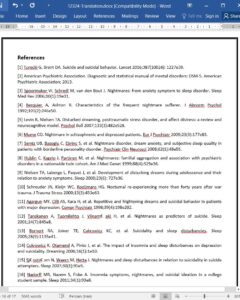