Despite the popularity of viral marketing, its influencing factors have not been thoroughly investigated, especially in the context of social media. Successful viral communication depends on the sender's ability to turn receivers into active marketers, which requires the sender to consider both the perspective of the user/recipient and the message content. As the best means of engaging with social-media users and leading them to make a communication viral remains debated, this study seeks to determine the factors that influence users' willingness to share viral content. In this investigation, partial least squares structural equation modeling was employed to analyze data gathered from an online survey of Facebook users, focusing on a case study of a Facebook event. The results showed that meaningful content affects users' attitudes regarding sharing communications, and revealed significant differences between user groups regarding the effect the emotional tone and arousal level of content has on sharing behaviors.

Social media has become a regular part of daily life for millions of people worldwide: users post tweets and become fans; explore mobile apps; like, search, create, and share content; and make transactions. These social and emotional interactions evolve over time, becoming both real and virtual extensions of users and their relationships.

Previous studies have investigated the sharing of viral content through the Internet by examining users' demographic characteristics, motivations, and behaviors, but few have investigated what motivates users to share viral communications on social media. Berger and Milkman (2010) defined social-media viral communications as a form of peer-to-peer communication in which individuals are encouraged to share promotional messages within their social networks; they mainly focused on how content features drive virality, especially at the emotional level. The need to understand how social-media personas affect viral marketing communication, and why some users are better suited to beginning the dissemination of messages (Kaplan & Haenlein, 2011) impelled us to conduct this research. 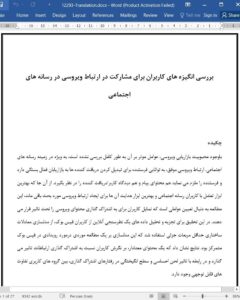