Background Postpartum depression (PPD) affects a high number of women, often the first manifestation of a mood disorder that will occur later in life, bringing serious consequences for the patient and her offspring. Depression today is the leading cause of disability worldwide. The aim of this study was to evaluate the effectiveness of a preventive cognitive behavioral therapy (CBT) for PPD.

Methods Pre-post therapy study, as part of a population-based cohort study. Pregnant women without a diagnosis of depression participated, who were divided into two groups: risk of depression (CBT) and a control group (without therapy). The preventive therapy consisted of six sessions of CBT, administered weekly. The Outcome Questionnaire (OQ-45) was used in all sessions. The Mini International Neuropsychiatric Interview and Beck Depression Inventory-II were used on three occasions. The final statistical analyses were performed by Poisson regression.

Results The prevalence of PPD in the risk group was 5.5% and in the control group 2.2%, with no difference between the groups (PR 1.66 95% CI 0.44-6.18). The OQ-45 averages gradually reduced during the therapy sessions, indicating therapeutic progress. Schooling was an associated factor, both with the manifestation of PPD and with the greater effectiveness of the therapy.

Limitations Rate of 40.5% refusal to preventive treatment and absence of a group with similar characteristics in another therapy model.

Pregnancy and postpartum are periods characterized by physical, emotional, social and hormonal changes that make women more susceptible to the increase in, or appearance of some symptoms or even fullblown psychiatric disorders, such as depression (Hartmann et al., 2017). Depression during the pregnancy-puerperal cycle presents rates that can vary between 10 and 20% (Becker et al., 2016; Pereira and Lovisi, 2008) for the pregnancy period and between 15 and 25% (Moraes et al., 2006) in the postpartum period. The incidence of postpartum depression (PPD) is 12% (Shorey et al., 2018). As a result of this work there is an increased effort by researchers to help define an effective, low-cost and, especially a preventive treatment for the puerperal period. Therefore minimizing the traumatic consequences that inevitably impact the whole family. 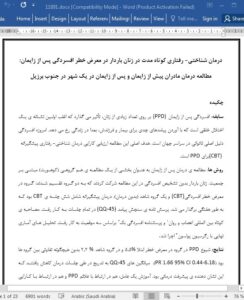 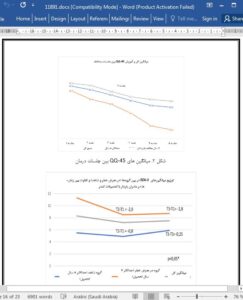 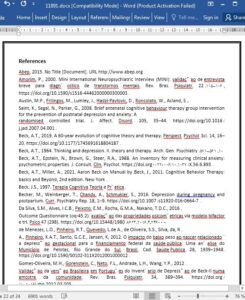