The penetration of nonlinear loads on power systems increases distortion levels and can cause severe problems to power systems. Many factors affect the degree of generated harmonics including attenuation, diversity, system voltage, source impedance and frequency. Hence, the purpose of this paper is to investigate and accurately quantify the effects of these factors on the harmonics produced by a group of Personal Computers (PCs). Experimental measurements and computer simulations are performed to confirm the observations.

Recently, residential customer’s input voltages are increasingly becoming more distorted due to the increase use of nonlinear loads within power systems such as Personal Computers (PCs). It has been estimated that by 2012, 60% of the loads on power systems will be nonlinear loads [1]. The penetration of these loads increases the harmonic level in power system networks and can cause severe problems such as an increase in voltage distortion, a decrease in Power Factor (PF), impact energy metering, system resonance, thermal effects on rotating machines, equipment failure, increase system losses, malfunction of electronic devices and decrease the overall system efficiency [2-5].

Power systems harmonics are continuously varying due to many factors. In this paper the diversity, attenuation, frequency, impedance and voltage variation effects have been evaluated for the normal variation of parameters within a supply. Although system voltage, impedance and attenuation effect impact harmonics notably, system frequency and diversity effects have minor impacts on the produced harmonics produced by a cluster of PCs. Moreover, these factors are not isolated from each other. Rather, they occur simultaneously and their accumulative effects can be effectively high or some kind of harmonic compensation may occur. It is also proven that when a nonlinear device is supplied by different power systems, their generated harmonics and other power quantities will be different. 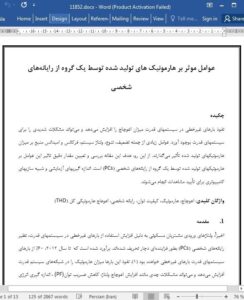 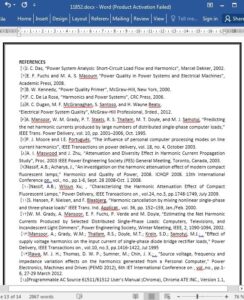