Purpose This research aims to investigate the extent to which business strategy mediates the relationship between reliance on integrative strategic performance measurement (RISPM) and organisational performance.

Design/methodology/approach A self-administered survey of 157 managers in Indonesian financial institutions was used to test direct and indirect effects among the hypothesised variables.

Findings The findings indicate that business strategy has a full mediating effect on the relationship between RISPM and organisational performance.

Originality/value This study indicates that performance measurement systems should be designed in conjunction with business strategies to obtain superior performance. More specifically, in the Indonesian financial institutions, applying a differentiation strategy is found to be most effective in gaining competitive advantage and superior performance.

The primary objective of the study was to seek the effect of RISPM on enhancing organisational performance through business strategy. This objective was inspired by previous studies, which found that implementing ISPM to gain superior performance provides mixed results. One reason, advanced by Ax and Bjornenak (2005), is that members of organisations do not have a clear idea of what they are relying on when using SPM, for example, when adopting ISPMS such as BSC. It is suggested that RISPM links to strategic and operational activities as well as to behavioural aspects of employees and, in this way, supports business strategies that lead to competitive advantage and superior performance. Additionally, the implementation of SPM for the organisation should link employee behaviour to organisational objectives by encouraging employees to achieve their target and by motivating and guiding them to accomplish positive tasks (Lawson et al., 2003; de Waal, 2003; van Veen-Dirks, 2010). Making the link between employees’ activities, actions, decisions and improvement activities would lead to the achievement of organisational objectives overall (Kaplan and Norton, 1992). According to this argument, we developed ISPM that links not only to strategic and operational activities but also to behavioural aspect of employees. By establishing the reliance connection to ISPM, we arrive at RISPM. 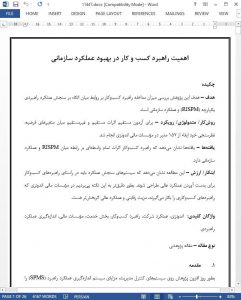