In the current investigation, four reinforced concrete beams with square cross sectional area were poured and tested up to failure under the action of three-point loads. Three of them were designed to contain small web openings of different shapes, square, rectangular and circular while the other beam had no openings (control beam) for the purpose of comparison of findings. The load–deflection traces were successfully obtained for the tested specimens. The results indicated that perforating reinforced concrete beams with small web openings leads to a slight reduction in their ultimate loads corresponding to an increase in the ultimate deflection. Also, it was concluded that the beams with circular web openings had better shear resistance than other shapes selected here.

In practice, openings may be provided in reinforced concrete beams to be used as an access for ducts and pipes used for electrical, mechanical and sewage services. Presence of such openings produces a sudden change in the cross-sectional area leading to the propagation of stress concentration at the opening edges. This will partially reduce the stiffness and then the load carrying capacity of the beam. Web openings take different configurations but the most common shapes are circular and rectangular. Regarding openings size, the previous studies classified the web opening based on their size. Hence, the terms beam with small and large openings were widely used in the literature [1]. However, Ahmed et al. [2] considered that identifying an opening as either small or large depends on the structural behaviour of the beam. Hence, the opening can be considered small if the common beam theory applies. In addition to static behaviour, some studies were carried out to investigate the dynamic response of beams with and without openings [3,4]. This reflects the variation in behaviour of beam with web openings under static and dynamic loading in addition to other circumstances. 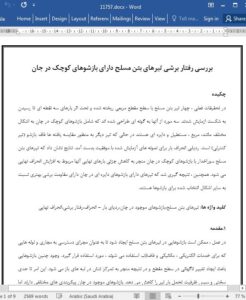 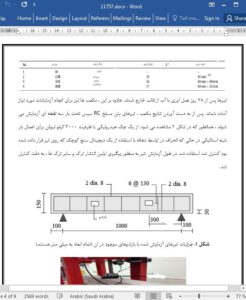 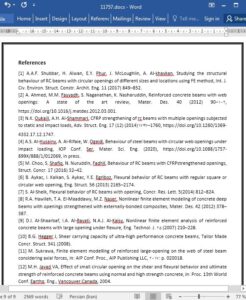