We suggest that for better breast cancer detection, an invasive impedance technique may be enhanced by combination with other cancer indicators. 3D EIT should be improved through collective efforts. EIM using a pair of electrode arrays is a viable method with great potential. Magnetic induction tomography and other magnetic induction based impedance imaging for breast cancer detection are promising and merit further exploration as well.

Breast cancer is the most common malignant tumor among women in the western world [1]. Early detection of breast cancer plays the leading role in reducing the mortality rate. Currently, X-ray mammography is the standard screening technique for breast cancer detection [2,3]. However, it has some limitations including reduced ability to detect carcinoma in women with dense breast tissue. In addition, due to the morphologic similarity between benign and malignant lesions, mammography is less useful as a diagnostic technique. Patients with positive mammographic findings require a biopsy for definitive diagnosis. Biopsies of breast lesions discovered in mammography screenings are negative for malignancy in up to 80% of patients [4].

Electrical impedance has been used for tackling a challenging problem—the detection of breast cancer for over 70 years. Intensive in vitro and limited in vivo measurements support the efforts in further developing impedance-based invasive or noninvasive techniques for breast cancer detection. Invasive impedance techniques could have advantages of low cost and fast response. However, the accuracy of tumor localization and the design of electrodes need to be improved before invasive methods could be used in clinical settings. Their detection accuracy may also be improved from combinational use with other cancer indicators, as evidenced by the development of ‘smart needle’ from BioLuminate, Inc., San Jose, CA. By combining impedance measurement with measurements of oxygen partial pressure, temperature, light scattering and absorption properties including deoxygenated hemoglobin, vascularization, and tissue density, the smart needle technique has the potential to achieve high detection accuracy [60]. 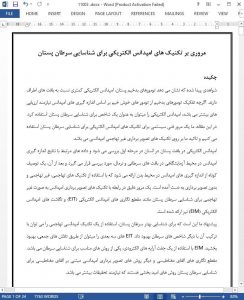 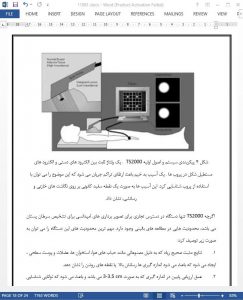 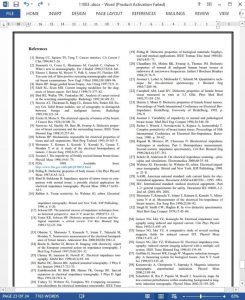