With the development of urbanization, a huge amount of wasted vehicle tyre and wasted green house plastic film are generated everyday and they have a potential risk for human health and environment. In this article, an integrated modification method was developed by proportionally using recycled crumb rubber (CR) from vehicle tyre and polyethylene (PE) from wasted green house plastic film in the bitumen in order to modify its functioning in pavements. Experimental tests such as Softening point, Penetration, Dynamic Shear Rheometer (DSR), Multiple Stress Creep Recovery (MSCR) and Bending-Beam Rheometer (BBR) were carried out in comparison with the bitumen properties. Analysis on physical and rheological performance of modified bitumen binders indicated the addition of CR decreased the bitumen creep stiffness at low temperature which in turn reduced the brittleness and cracking risk. Meanwhile, the addition of PE increased the bitumen stiffness at high temperature. According to the morphology analysis, two continuous twisted phases were formed in the modified bitumen, which indicated enhanced rheological property and high-temperature performance. The addition of CR and PE cooperatively improved the bitumen properties at both high and low temperatures. Consequently, the utilization of these two waste materials not only improved the pavement performance with the modified bitumen, but also minimized their disposal at landfills.

Since 2016, total expressway length in China is over 130 thousand km. In the field of pavements, the asphalt mixture is the dominant material for surface paving course. Asphalt mixture is produced at high temperatures by mixing predetermined ratio of aggregates (coarse and fine), bitumen and filler, after paving and compaction process to form a flexible pavement [1]. The physical and rheological properties of bituminous binders play an important role in the performance of asphalt mixtures [2,3]. Sybilski et al. reported that bitumen properties have approximately a 40% contribution to the rutting resistance of asphalt pavement [4]. In high-temperature regions, rutting (permanent deformation) is a major distress of asphalt pavements, where mixtures placed in the wheel paths compact to form a groove or rut due to a heavy vehicle. It is important to improve the bitumen properties so as to accommodate increasing traffic loading and environmental attack.

Utilization of recycled CR and PE as modifying agents to prepare the modified bitumen has been investigated in this study. Properties of modified bitumen at both high and low temperatures were evaluated by using conventional physical tests and rheological measurements. Some major findings can be given below:

1) Based on the FM images, the phase morphology shows a continuous bitumen phase with dispersed polymer particles by adding a single agent. With the addition of CR and PE under integrate modification, a nearly continuous polymer phase was appeared and finally formed two continuous twisted phases. The formation of these two interlocked phases verify the improved high-temperature performance. 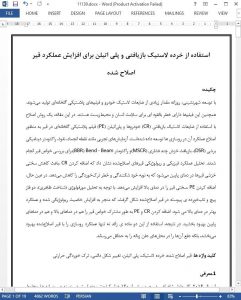 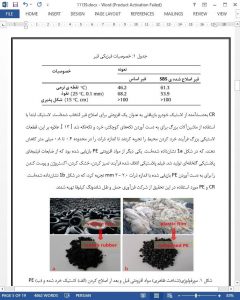