A distributed power digital-to-analog converter (DAC) architecture with multi-level segmentation is proposed. Due to its large output voltage swing, it can be used as a large swing arbitrary waveform generator suitable for a variety of wireline, fiber optic, and instrumentation applications. A proof-of-concept 56-GS/s 6-bit implementation with most significant bits (MSBs) and least significant bits (LSBs) segmentation and full-rate clock was manufactured in a production 130-nm SiGe BiCMOS technology. The circuit features 14 independent data bits-seven for the three MSBs and seven for the three LSBs-each running at up to at least 44 Gb/s. The measured saturated output power and bandwidth are 17 dBm and 45 GHz, respectively. An output swing of 3.4 Vpp per side is observed in 50- Ω loads. Spectral measurements demonstrate multi-bit modulation at carrier frequencies as high as 56 GHz. To the best of our knowledge, this marks the highest output-bandwidth highest voltage-swing current-steering DAC in silicon.

IT IS expected that global IP traffic will reach zettabytes levels by 2017, with an annual growth rate of over 20% [1]. To satisfy the market demands and make optimal use of the available channel bandwidth, future optical transceivers must allow for adjustable data rates and modulation formats, including multi-carrier orthogonal frequency division multiplexing (OFDM). Such software-defined optical transceivers have recently been proposed [2]–[4] in order to optimize network capacity by dynamically adapting to account for channel impairments and transmitter and receiver nonidealities.

A novel large-swing distributed DAC-driver architecture was introduced suitable for next-generation software-defined fiber- optic systems with high-order quadrature amplitude modulation (QAM) and OFDM format. A proof-of-concept 6-bit implementation in a commercial 130-nm SiGe BiCMOS process has demonstrated 17.5-dBm output power (over 6-V differential voltage swing in 50 ) from dc to 40 GHz and over 13-dBm output power at 50 GHz. Operation at 44 GBd (limited by test equipment) and modulation of a 56-GHz carrier over six amplitude levels suggest that the DAC is suitable for 56-GBd systems with 64-QAM modulation. A comparison of the proposed large-swing DAC with other recently published work is summarized in Table I. 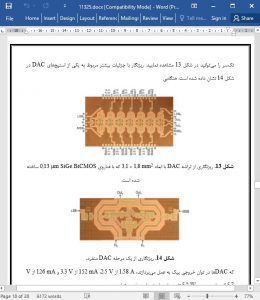 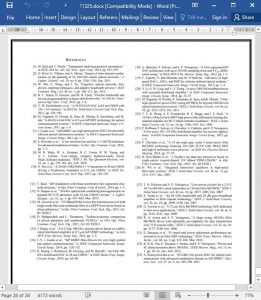