For an optimal design of synchronous reluctance motor (SRM), rotor topology and the choice of numerous design variables remain a significant challenge. Generally, the rotor of SRM is only designed in the axial or radial direction, and the design variables are reduced based on experience; however, the above process is time-consuming. In this paper by comparing performances of SRM with different pole/slot combinations and the numbers of flux barriers, the SRM topology with 4-poles/36-slots combinations, distributed windings, and three-layer flux barrier is first proposed. And then, the step-skewed rotor with asymmetry flux barriers and flat tips are adopted. Further, the Taguchi method, differential evolution (DE) algorithm and Pareto evaluation are integrated to implement the sequence subspace multi-objective optimization, the proposed SRM design scheme is obtained. Finally, a 3kW SRM prototype is designed and its FEA (finite element analysis) is carried out to validate the technical advantages of proposed SRM topology and design methods.

Recently, due to the price fluctuation of permanent magnets (PM) and the instability of the supply of PM materials, the synchronous reluctance motor (SRM) has become increasingly attractive in various fields, especially in electric vehicles and industrial applications. The SRM has good flux-weakening performance and structural stability to avoid the use of PM. However, it still has some disadvantages such as large torque ripple, low torque density and low power factor, which restricts its popularization and application.

To improve characteristics of large torque ripple, low torque density and low power factor of SRM, this paper firstly proposes an appropriate SRM topology. And then, the SRM design is accomplished by combining Taguchi method, DE algorithm and Pareto evaluation to realize the sequence subspace multi-objective optimization. The FEA of a 3kW prototype confirms that the proposed SRM topology and design scheme can meet the multi-target design requirements, which also has the value of design reference and applications. 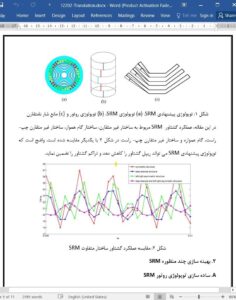