Many animals use the Earth’s geomagnetic field for orientation and navigation, but the neural mechanisms underlying that ability remain enigmatic [1, 2]. Support for at least two avian magnetoreceptors exists, including magnetically activated photochemicals in the retina [3, 4] and ferrimagnetic particles in the beak [5, 6]. The possibility of a third magnetoreceptor in the inner ear lagena organs has been suggested [7]. The brain must process magnetic receptor information to derive constructs representing directional heading and geosurface location. Here, we used the c-Fos transcription factor, a marker for activated neurons [8], to discover where in the brain computations related to a specific set of magnetic field stimulations occur. We found that neural activations in discrete brain loci known to be involved in orientation, spatial memory, and navigation may constitute a major magnetoreception pathway in birds. We also found, through ablation studies, that much of the observed pathway appears to receive magnetic information from the pigeon lagena receptor organs.

Birds appear to use magnetic cues to determine heading direction and location [2, 9]. Two avian magnetoreception mechanisms have been proposed: a photoreceptor, where cryptochrome molecules form radical pairs in certain wavelengths of light within a magnetic field [3, 4], and a ferrimagnetic receptor in the beak that is innervated by the trigeminal nerve [5, 6]. In addition, the vestibular lagena of the inner ear contains possible ferrimagnetic compounds that could stimulate directionally selective receptor cells [7]. Indeed, lagena ablation has been shown to disrupt bird’s homing ability [10]. 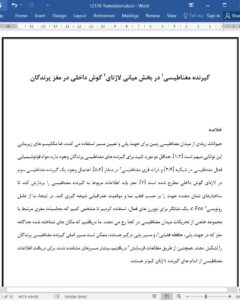 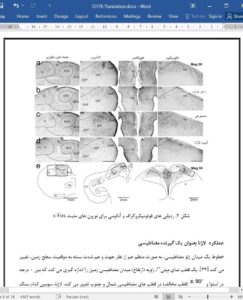 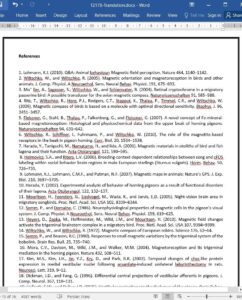