Information and communication technologies (ICT) are critical to leverage the digital divide among disadvantaged individuals, groups, and communities. Given the persistent urban–rural gap in technology adoption and usage, this study intends to understand factors motivating rural farmer’s adoption of social media marketing (SMM) tools in China. We contextualize and extend the Unifed Theory of Acceptance and Use of Technology (UTAUT) framework to China’s agriculture sector. Specifcally, we propose product SMM suitability as a new moderator based on the channel/product ft literature. The survey method is utilized to validate the proposed research model. Six follow-up interviews are analyzed to supplement the quantitative survey fndings. While the result confrms UTAUT’s generalizability in China’s agriculture sector, it also demonstrates limited generational divide and gender divide in SMM adoption among Chinese farmers. More importantly, the newly proposed moderator, SMM product suitability, is empirically validated. Farmers consider nongrain products to be more suitable for SMM than grain products. SMM product suitability not only directly increases Chinese farmers’ SMM adoption intention, but also moderates the relationship between behavioral intention and use as well as the relationship between facilitating conditions and use.

Digital inclusion is critical to social stability and sustainable development. However, disparities concerning access and use of ICT efectively have long existed between individuals, households, businesses, and geographic regions (Ejemeyovwi et al. 2020; Newman et al. 2017). One such divide is the urban–rural gap, where rural residents signifcantly lag behind their urban counterparts in computer and Internet access and usage (Aker 2010; Gao et al. 2018; Jensen 2007). In a recent study, Loo and Wang (2017) examine China’s e-development data from 2008–2014. They fnd that the urban–rural digital gap has widened over the years, even though digital disparities at the provincial level have been drastically decreased. China is recognized as a global digital superpower with the US and ranked top 4 in digital riser ranking of G20 by the World Economic Forum (20201 ). However, the urban–rural digital divide is still a reality the country needs to confront, as its 40% rural population only represents 28% of the country’s Internet users2 (Statista 2020).

China has entered a new era for digital and mobile innovations (Tyfeld and Zuev 2018; Zhong and Nieminen 2015). Our research applies and extends UTAUT framework to understand Chinese farmers’ decision to use SMM to directly promote agriculture products to end consumers. Mobile technologies play a crucial role in promoting digital inclusion in China, and mobile-based applications, such as WeChat, greatly facilitate access to and use of digital innovations in rural China. We examine factors encouraging farmer’s adoption of WeChat-based SMM, and our research contributes to bridge the urban–rural digital gap. 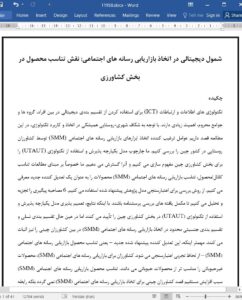 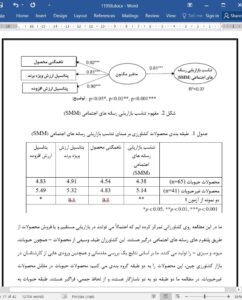 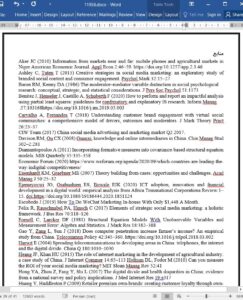