Background Idiopathic pulmonary fibrosis (IPF) is a complex lung disease, characterized by progressive lung scarring. Severe COVID-19 is associated with substantial pneumonitis and has a number of shared major risk factors with IPF. This study aimed to determine the genetic correlation between IPF and severe COVID-19 and assess a potential causal role of genetically increased risk of IPF on COVID-19 severity.

Methods The genetic correlation between IPF and COVID-19 severity was estimated with linkage disequilibrium (LD) score regression. We performed a Mendelian randomization (MR) study for IPF causality in COVID-19. Genetic variants associated with IPF susceptibility (P<5 × 10−8) in previous genome-wide association studies (GWAS) were used as instrumental variables (IVs). Effect estimates of those IVs on COVID-19 severity were gathered from the GWAS meta-analysis by the COVID-19 Host Genetics Initiative (4,336 cases & 623,902 controls).

Interpretation The strongest genetic determinant of IPF, rs35705950 at MUC5B, seems to confer protection against COVID-19, whereas the combined effect of all other IPF risk loci seem to confer risk of COVID-19 severity. The observed effect of rs35705950 could either be due to protective effects of mucin over-production on the airways or a consequence of selection bias due to (1) a patient group that is heavily enriched for the rs35705950 T undertaking strict self-isolation and/or (2) due to survival bias of the rs35705950 non-IPF risk allele carriers. Due to the diverse impact of IPF causal variants on SARS-CoV-2 infection, with a possible selection bias as an explanation, further investigation is needed to address this apparent paradox between variance at MUC5B and other IPF genetic risk factors.

Patients with Idiopathic pulmonary fibrosis (IPF) are at increased risk of COVID-19 mortality compared with the general population [14,15]. Whether the pathogenic mechanisms that lead to the development of IPF are causally related to the severity of COVID-19 is unknown and of paramount importance to inform preventive strategies and identify whether there is rationale for investigating the role of anti-fibrotic therapies in severe COVID-19 [28]. Using a two-sample Mendelian randomization approach and genome-wide genetic correlation analysis, we found that overall there was a genetic correlation between IPF and COVID-19 severity, but the genetic variants associated with IPF did not confer an increased risk of severe COVID19. However, this was driven by a single outlier variant at the MUC5B locus, which had an apparently protective effect on the severity of COVID-19. Removal of this outlier demonstrated that, collectively, the remaining variants associated with increased IPF risk were associated with increased risk of severe COVID-19 (Table 1). This finding supports the epidemiological studies that have reported a strong association between IPF and COVID-19 severity [14,15,29]. 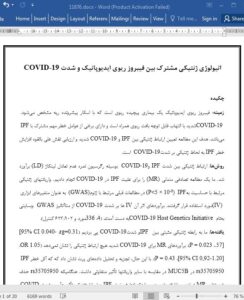 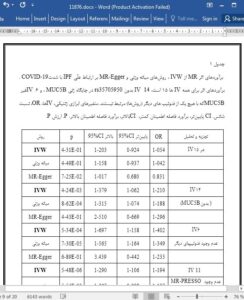 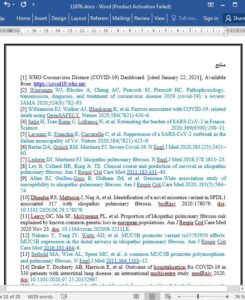